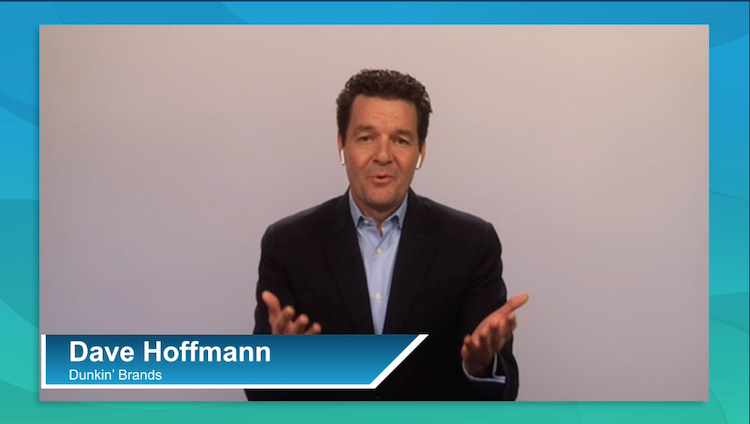 On day two of Restaurant Finance Week, Piper Sandler analyst Nicole Miller Regan interviewed Dunkin’ Brands CEO David Hoffmann, who told attendees right off the bat he wouldn’t be sharing any more details about the momentous acquisition of Dunkin’ by Inspire Brands. Instead, Hoffmann shared insights on Dunkin’s operations this past year, from partnering with TikTok star Charli D’Amelio on a signature drink to introducing ghost pepper donuts.

Hoffmann joined Dunkin’ as president of the U.S. brand in October 2016, then was promoted to CEO of both Dunkin’ and Baskin-Robbins in July 2018. But before that, Hoffmann began his foodservice career at McDonald’s while in high school and spent 22 years working for the franchise giant. “I’ve spent 25 years giving my blood, sweat and tears to this industry, and I’ve worked and ran over 40 different countries across the globe,” Hoffmann said. “I think of myself as an operator at heart, but with a financial background.”

Dunkin’, No. 17 on our Top 200+ Franchises ranking, announced its closure of 800 locations this summer—a shocking number—yet Hoffmann said “people intuitively saw these were specific, strategic closures, all about getting more remodels and building the next generation.” Basically, the old stores were off-brand and were going to close regardless of COVID-19, and are in line with their motto of “quality over quantity.”

“I’ve always believed that if you can understand the consumer, know your brand position and how it fits into that, build the right product mix and create a strong collaboration with franchisees, that’s a powerful platform to drive a lot of success,” Hoffmann said. “The low-touch, high-frequency ticket and the habitual nature of coffee at a fair price at the speed of Dunkin’ wins in any type of environment.”

From bringing its app development in-house to introducing new menu items such as Dunkin’ Refreshers, the brand has had quite the year. After the success of its signature drink partnership with Charli D’Amelio, TikTok’s most-followed star, Dunkin’ started experiencing a boost in cold brews and “started going bold on cold” as part of its strategy, plus it saw greater brand awareness among teens and Generation Z.

“With our partnership with Charli, our National Coffee Day promotion and our ghost pepper donut, it’s about continuing to be in the cultural discussion,” Hoffmann said. "At the end of the day, safety and access to the brand will be the table stakes that give you permission to bring innovation to the marketplace, but you have to have the first part solidly in place.”

Of Dunkin’s 600 franchisees in the U.S., about 45 percent of its base are people of color. On average, each franchisee owns about eight restaurants, and in newer markets some have 10-20, with its largest ‘zees having 200-250 sites. “But the diversity of the portfolio is what makes it so great,” Hoffmann added.

The consumer segmentation work Dunkin’ completed helped inform its culinary blueprint plan. With a strong loyal core user built around commuters who come in for their drip coffee in the mornings, Dunkin’ started stretching into two other types of consumers—the “coffee adventurer” and the health-aware consumer on a budget. With new offerings such as Matcha and oat milk lattes, and a Beyond Sausage partnership and “under 200 calories” menu, Dunkin’ is “holding true” to its core but expanding its base to continue building relevance, said Hoffmann.

“As a brand we’ve been able to pivot and change, to see something that speaks to a modern and relevant brand built for durability and to last,” Hoffmann said. “I’m highly confident in Dunkin’ and Baskin’, we have great plans in place and a great blueprint for growth.”

Next up is another transition for Dunkin': It's integration into Inspire Brands.