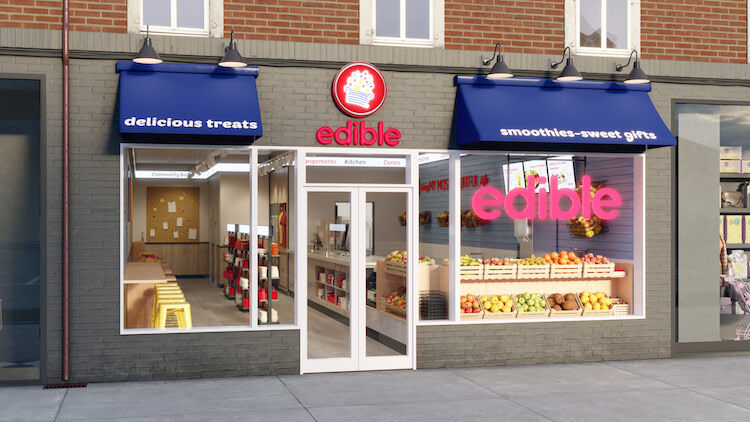 Edible has built five new-format stores, shown above, and counting, which feature fresh fruits out front so customers can see the dipping in chocolate and other preparation. “Nothing is hidden,” says COO Cheikh Mboup.

In an article about Edible Arrangements in January 2021, founder and CEO Tariq Farid vowed the retailer known for its fresh fruit bouquets was back on track. That was after two years in a row of double-digit sales declines and 150-plus stores shed. This October, the Franchise Times Top 400 offers proof.

Edible pushed sales to $587 million in 2020, up 32.7 percent and a remarkable turnaround from an 11.8 percent decline the year before, according to the Franchise Times Top 400, which publishes October 1. COO Cheikh Mboup attributed the gain to a slew of new products, particularly in the bakeshop category, that were in the “theoretical” phase at the end of 2019 but proved their worth last year.

“You’ll be one of those who will appreciate the journey, knowing it,” Mboup said in an interview this August, referring to the February 2021 cover story in Franchise Times. Read the article here, including about franchisee discontent at Edible. “We were in theoretical phase the last time we talked. We were introducing products, that we thought were right,” but no one can prove it until results are in.

“Consumers voted with their wallets, and franchisees voted by selling in their stores, and delivering this product and emotionally connecting” with customers.

The nearly 33 percent rise in systemwide sales happened during a year of pandemic-related closures. “In our world, our category of gifting, which we engaged in the most, was quite frankly at risk, because sharing that fruit arrangement wasn’t the normal practice in public places,” Mboup said. “We didn’t even want to be in the same room” with others, not to mention touch the fruit.

“But the other categories filled that gap,” and performed better than expectations. “The baking categories really stood out.” Many franchisees were skeptical, because every store had to install an oven. “But what that did for us, it opened up the entire baking category: cookies, cheesecakes, brownies, cupcakes, and when you put all of those into a sub-category…it was one of the best-performing categories that we have,” he said.

Flowers, too, “did extremely well.”

Mboup said he and franchisees have been having “the tough conversation” about profitability at the store level. “The franchisees, that I consider for me mentors and guides, were able to see that our labor did not actually increase, but this helped us become not only relevant but perform greater than we projected,” he said. “So with that being said, yes, the skepticism, I believe it reduced tremendously.”

New franchise agreements have been inked recently in California, Utah, Massachusetts, Florida and Montana, among others. Edible has built five new-format stores, with more to come, which feature fresh fruits out front so that “nothing is hidden.”