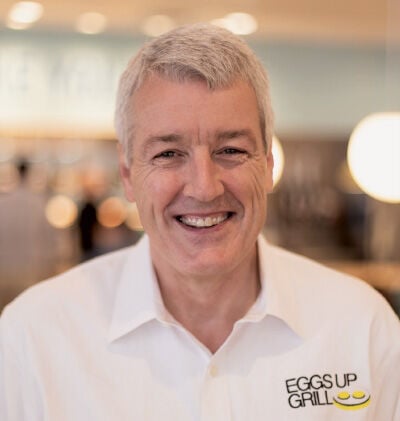 New CEO Ricky Richardson wants to be close to the action at Eggs Up Grill.

After "a couple decades" helping grow TGI Fridays from five to more than 900 units in various roles, Ricky Richardson is eager to jump back into start-up mode at Eggs Up Grill. The concept with about 35 locations started in Pawleys Island, South Carolina, back in 1997. It grew slowly, but lately has caught the wave of breakfast fanaticism. Private equity firm WJ Partners acquired it in 2018 and has primed it for growth, including by bringing Richardson on board as CEO. "Obviously, I saw a ton of growth opportunity, that was one of the things that really attracted me to it," said Richardson, who most recently was president at Fridays. "I purposefully chose not to get into a legacy brand; I love the industry and being close to where the action is. I wanted to bring my background someplace to help with growth." As he works to attract new owners, Richardson said ideal multi-unit franchisees are not "just pure balance-sheet franchisees, it’s gotta be someone who shares that energy and passion for the restaurant industry and understands the role of having a great team in place that shares that culture, too." Eggs Up aims to open about 18 locations in 2020.

Habit Burger shareholders gave a thumbs up January 6 to the proposed purchase of the California-based chain by Yum Brands. The Taco Bell parent acquired Habit in a $375 million deal ($14 per share). Wells Fargo analyst Jon Tower called the deal "more mouse-like in stature" than the "elephant-sized" deal investors were looking for from Yum. He wrote Habit "would almost immediately benefit from Yum’s scale and institutional know-how around supply chain, marketing and also Yum’s franchise network." While Habit is mostly company-owned, with more than 270 stores in 13 states, he noted the concept has grown from five franchise stores in 2015 to 28 by the third quarter of 2019, with seven international locations. "What we view as important for shareholders is that this deal does little to alter Yum’s balance sheet," he wrote. (Yum had $691 million in cash as of the third quarter of 2019.) He added there is "relatively low menu overlap today vs. the existing portfolio." Yum also owns Pizza Hut and KFC.

New traffic data shows just how explosive the Popeyes chicken sandwich—and the re-launch in November—really were. On a typical summer Sunday, Popeyes gets about 75,000 visits, according to Cuebiq, a marketing measurement firm that taps into mobile user data to glean traffic insights. On August 24, the number of visits rocketed to nearly 140,000, almost double the typical Sunday. The reason, as the QSR world knows well, was the exceptionally popular chicken sandwich. The sandwich didn’t do much when it first launched on August 12, but when the company started a Twitter tiff with rival Chick-fil-A on August 19, things got pretty crazy. According to Cuebiq, traffic on August 20 shot up to about 100,000 and continued to rise through the week to the high water mark just shy of 140,000. And the re-launch saw almost as impressive numbers. Timed for a Sunday—a parting shot toward Chick-fil-A—the concept saw 126,000 visits.

When the National Labor Relations Board in December absolved McDonald’s of responsibility for alleged labor violations by its franchisees, Matt Haller of the International Franchise Association responded in a word: "Finally." "After five years of litigation, five years of unnecessary legal costs, and five years of uncertainty in the franchise sector, IFA is thrilled the NLRB came to this common-sense conclusion," Haller said in a statement. He is senior VP of government relations and public affairs. In a 2-1 ruling, the NLRB ordered an administrative law judge to approve settlement agreements between McDonald’s franchisees and workers. Franchisees will be required to pay $171,636 to the affected workers and set up a $250,000 fund to handle future claims.