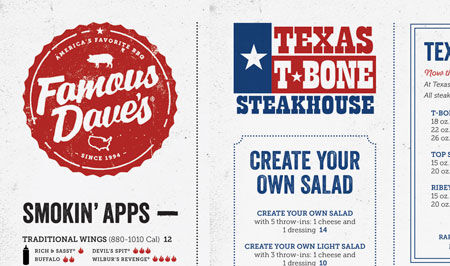 Famous Dave's is trying out a co-branding strategy alongside Texas T-Bone Steakhouse.

Co-branding is nothing new. The franchise world has a long history of combining concepts to enhance efficiency. But an idea from BBQ Holdings, the parent company of Famous Dave’s and other non-franchised concepts, turns the model into a growth vehicle for franchise growth while also helping independent restaurant owners bridge the COVID-19 sales gap.

BBQ Holdings CEO Jeff Crivello said they’ve had success with virtual operations, where Famous Dave’s operates out of shared kitchen spaces like the back of Granite City, which the company acquired just as the pandemic was ramping up. He said such models have been useful for getting close to historic sales.

Crivello said the company sank by about 35 percent early in the pandemic, and has recovered somewhat, but incremental revenue to the tune of about $10,000 a week from such virtual, delivery-only operations has really helped. The company also just launched Hayward’s Hen House, an all-virtual concept being tested in eight Famous Dave’s locations. The brand, like many other virtual concepts that have popped up since COVID-19 hit, sells wings, chicken tenders and the company’s chicken sandwich online. With just a week since the launch, he said they don’t have enough data to share, but it’s "doing well."

"How do you fill those gaps? We really found that ghost kitchens virtual brands and dual concepting are really working," said Crivello. "The most efficient business model is the dual brand."

There’s just one dual-brand restaurant so far, but he said he can see a lot of potential there. Famous Dave’s occupies the same building as the non-franchised Texas T-Bone Steakhouse in Colorado Springs. There’s a sign for each and a two-sided menu featuring items from each concept. For the three-unit owner of the steakhouse, Crivello said sales have doubled since reopening as a co-branded location.

He said he sees it as a potential growth vehicle for the many large-format independent operators out there that are looking for solutions.

"There’s a lot of overlap, when you’re a protein-centric restaurant, you have a lot of the same equipment," said Crivello. "So, we call it about a $50,000 investment versus a $500,000 to $1 million investment to stand it up on its own. It’s very efficient and cost effective."

Crivello said that’s not just a matter of the pandemic. While the crisis accelerated the challenges of casual dining, there are a lot of big issues pressuring such an operator.

"You have one building, you’re splitting your occupancy, splitting your labor in half an everything is shared. When you do that and centralize things, they become more efficient," said Crivello. "That’s the name of the game: efficiency. Occupancy and labor are very high, so finding an efficient model is very difficult."

He said they’re looking for operators who are in survival mode now, but sees plenty of potential for further growth as the industry rebounds.