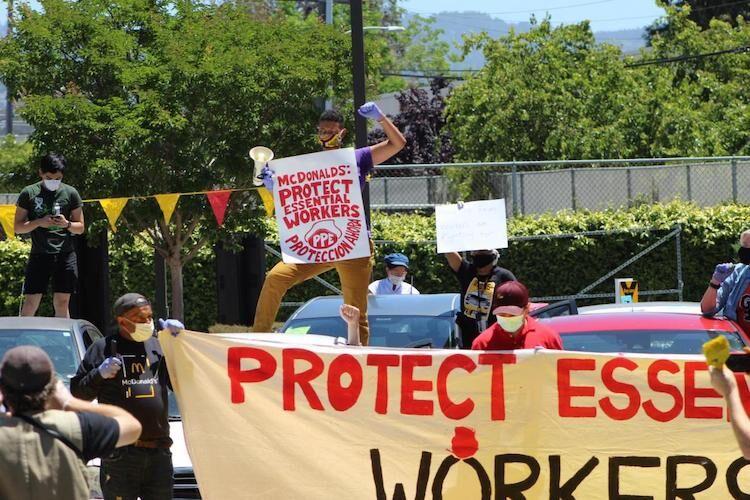 A rally sponsored by SEIU urged passage of California's FAST Act as a way to "protect essential workers." The bill advanced yesterday to the full Senate for a vote by August 31.

California's FAST Recovery Act, a closely watched effort to strengthen fast food workers' rights, advanced out of a key committee yesterday and will go before the state Senate for a vote by August 31. The bill has attracted a high-profile opponent: Greg Flynn, founder of Flynn Restaurant Group and the largest restaurant franchisee in the United States.

Proponents of the bill "are saying they're trying to address violations of labor law like wage theft and meal and rest break violations. Those are violations of existing law. What's needed is enforcement of those laws," said Flynn in an interview with KCRA News.

Flynn Restaurant Group recorded revenue of $3.7 billion in 2021 and operates more than 2,300 restaurants, according to the Franchise Times Restaurant 200. That includes 24 Panera Bread restaurants in northern California where he said profits are squeezed.

"Our margins, our profits have gone down from 9 percent to 3.5 percent. We're barely hanging on," he told KCRA News. "And when I think about the creation of a state council that is designed specifically to add more costs, I don't know if we can make it."

Also known as the Fast-food Accountability and Standards Recovery Act or A.B. 257, the bill would create a state council to negotiate on behalf of California's 500,000-plus fast food workers. If passed, it would apply to any food chain with more than 30 units in the nation.

SEIU, Service Employees International Union, backs the bill, saying fast food workers in the state face low wages, wage theft and unsafe working conditions. In a statement Wednesday night, before the vote to advance the bill out of the Senate appropriations committee, its sponsor Chris Holden advocated for it.

"As a former franchisee, I view this bill as the start of a conversation to solve issues that we cannot afford to ignore. While California continues to take the lead by being among the country's highest minimum-wage, worker protection and health mandates, A.B. 257 only continues that legacy with all the stakeholders at the table."

Fast Food Justice Ahora published a statement on its website supporting the bill. "Stand with fast-food workers to hold the multi-billion-dollar fast food industry accountable," it said. "Even before the pandemic, California's half a million fast food workers faced an industry rife with wage theft, sexual harassment, discrimination, violence in the workplace and health and safety issues. The COVID-19 pandemic has exacerbated many of these issues and workers' demands for more power in the industry have become more important than ever."

The FAST Recovery Act "will guarantee California fast-food workers the ability to shape industry-wide workplace standards and give them the power to hold corporations accountable for sticking to those standards," the statement said.

Before the "yes" vote yesterday in the Senate Appropriations committee, the International Franchise Association issued a release urging a "no" vote, in part because of "the significant price increase that seven in 10 Californians would face," said IFA President and CEO Matthew Haller.

"This bill forces an unnecessary tax on working families across the state during a time of historic inflation. It would unequivocally hurt locally owned and operated restaurants and have sweeping impacts on a huge portion of the restaurant industry."

Last December, David Kaufmann of Kaufmann, Gildin & Robbins wrote a fiery piece against the FAST Act in the New York Law Journal. "The state whose recently enacted AB-5 law has in significant part triggered the nationwide supply chain breakdown is now threatening to turn franchising into a socialist endeavor," he wrote.

The FAST ACT seeks to create an 11-member council to establish industry-wide standards on wages, working hours and other working conditions including the "necessary cost of proper living. In other words, the government will dictate how much franchisees must pay their employees in order to afford them a 'proper living'—whose attributes will be determined by, you guessed it, the state of California."

California Senate members have until August 31 to vote on the bill; if passed, it would return to the Assembly to vote on technical changes.