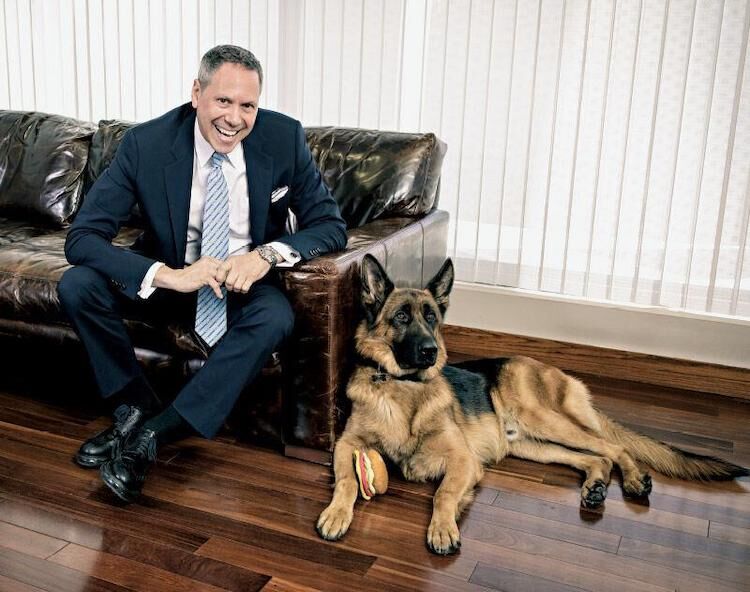 After merger with its controlling shareholder, the parent of Johnny Rockets and Fatburger can "raise as much cash as we can with stock, not just with debt. It takes off all the handcuffs," said FAT Brands CEO Andy Wiederhorn, shown in 2018 with his dog Fritz.

A corporate restructuring at FAT Brands, the parent of Johnny Rockets and Fatburger plus seven other brands, will remove restrictions and allow more options to purchase franchises in 2021, said CEO Andy Wiederhorn.

FAT Brands is merging with its largest shareholder, Fog Cutter Capital, the entity that owns 80 percent of shares and is controlled by the Wiederhorn family. In order to preserve more than $100 million of net operating loss carry-forwards for tax purposes, Fog Cutter could not fall below 80 percent share ownership; with the merger that limitation is dissolved. That in turn will free up options for FAT Brands as it continues an acquisition push.

"By effecting the merger, FAT Brands will become the parent and Fog Cutter will be the subsidiary. That 80 percent limitation goes away, and now FAT Brands can buy new targets with stock. We can raise as much cash as we can with stock, not just with debt," Wiederhorn said.

"It makes our public float significantly bigger, which is good to get our stock price up. It gives us the ability to buy companies with stock. It takes off all the handcuffs we had in place at the time of our IPO," he added, in 2017. FAT stock hit just under $7.89 on December 11, up from $3.13 last July.

FAT Brands bought Johnny Rockets in August in a deal Wiederhorn called "transformational" for the company. "I fully expect that we will make at least two acquisitions in 2021 and I think one will be on the scale of Johnny Rockets," he said. "We looked at Corner Bakery, we looked at Fuddruckers," but couldn't see a way to make those purchases work. "How do you turn around Corner Bakery when there's no office workers" during the pandemic.

Wiederhorn took FAT Brands public in 2017 in a non-traditional way, via Regulation A+ also known as a mini-IPO. It was the first franchised brand to try one, raising $24 million and then buying the parent company of Ponderosa and Bonanza steakhouses and then Hurricane Grill & Wings. Wiederhorn at the time had limited options for going public, because of his background with Fog Cutter, he told Franchise Times in a cover story interview in April 2018.