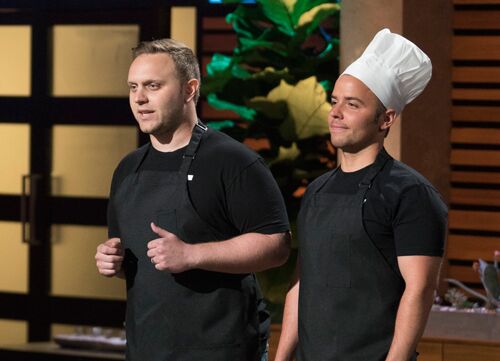 Are you feeling like a Fat Slob or a Fat Cow tonight? That’s the chief conundrum for lines of inebriated Fat Shack customers looking for a high-calorie lullaby to whisk them off to dreamland.

Fat Shack, an indulgent sub, wing and decadent desert concept, just reached 14 locations. And it just got a surge of attention from the pool of sharks on CNBC’s Shark Tank. Founders Tom Armenti and Kevin Gabauer secured a $250,000 equity deal with storied entrepreneur Mark Cuban.

The founders have a great story themselves, essentially founding the brand to meet their own late-night dining desires with a decadent New Jersey favorite.

"The big thing when I started the Fat Shack was putting these New Jersey style fat sandwiches on the menu. Anyone who grew up in Jersey has had fried things on a roll. It was really geared to that late night food. It was to give awesome customer service at 2 p.m. or 2 a.m., just to make sure that people were treated properly," said Amenti. "In my day we’d order from a chicken wing place at 2 a.m. and it was 50-50 that our delivery would show up. So my goal was to take that customer base way more serious."

As the story goes, he opened up the first location in 2010 with $5,000 in the back of a bagel shop that was closed during his prime operating hours of 6 p.m. to 4 a.m. He aimed to cover those pre-game, drunk and bedtime hours for all the hungry students at his alma matter. He soon outgrew the back of the bagel shop, and exported the brand to Colorado in 2011.

Since then, the brand has grown into a fledgling franchise system with seven franchised locations. It even found success out in the suburbs without the throngs of drunk young people. Gabauer, who went to college with Amenti, joined in 2013 to help get the brand ready for franchising.

"We had basically gotten to work making the menu easier and simplified operations to get ready for franchising. Boulder, Colorado, was our first test, we owned it but we paid franchise fees because we wanted to see how it worked," said Gabauer. "It turned out really well. After that, we got really organized and got all our paperwork written out. In 2015, our first franchise opened at the University of Denver."

Now, the company is debt free, growing and slinging more drunk food than the founders ever dreamed. So why bother with pitching on Shark Tank? Amenti said he was a regular watcher but never thought the concept was big enough and they didn’t need money, but when an open casting call he said it looked like a great way to spread the concept.

And it worked, after appearing on the show and getting an investment from Cuban, business and franchise inquiries skyrocketed.

"There’s definitely been a significant uptick at the store level, and we’ve also seen over 1,000 emails already for prospective franchisees," said Gabauer.

Amenti said that recognition would also help with a core goal of stamping out more entrepreneurs just like him, empowering hard workers inside the system that might not have the finances or experience.

"One of the biggest things for us has been this idea of working with people from the inside, who started as kitchen workers or delivery drivers to work with us and get them built into franchisees. So were hoping this exposure really helps people learn about Fat Shack so these young people who think, ‘I’ve tapped myself out or I don’t have the money to open a restaurant myself,’" said Amenti.

Already, two insiders have become multi-unit franchisees, and six of the 12 franchised locations started with loans from the company. Part of the $250,000 investment will go toward formalizing an official financing program within the company. If they grow with Fat Shack, that’s great, but they would be ready to follow their own entrepreneurial dreams.

"It’s a great almost starter franchise if they don’t have a ton of business experience or know how profit margins work. Coming in to us, we can get them into a Fat Shack and help them run the business and pay back the loan," said Amenti. "Then its do you want to open a second Fat Shack or open an auto garage, but we’ve given them the tools to open their next business. Now they’ve got collateral and that experience."