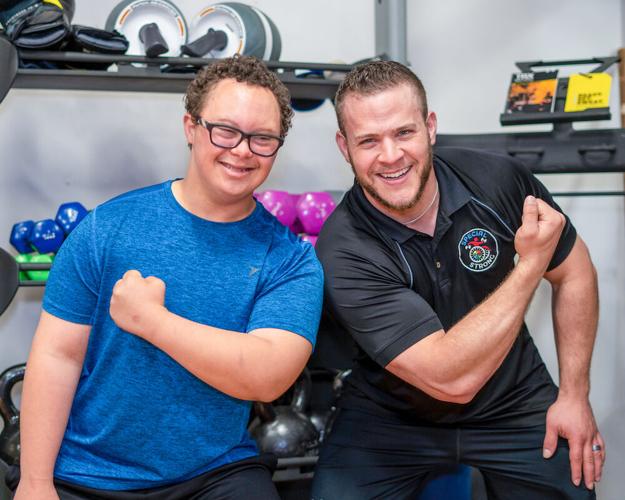 Daniel Stein, right, poses with a client at Special Strong, the adaptive fitness concpet Stein founded and began franchising in 2020 that has grown to seven total locations in Texas. 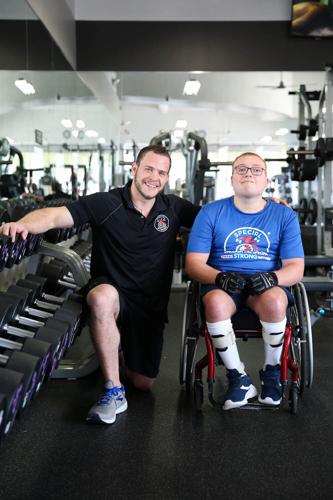 Daniel Stein, left, became a certified personal trainer in 2012 at a local gym and had the opportunity to work with a paraplegic client. Through that rewarding experience, Stein knew he wanted to turn it into a full-time career. 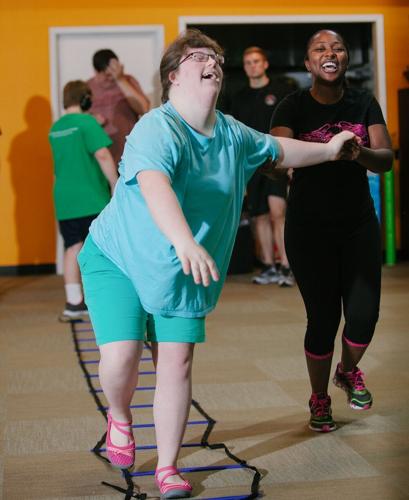 Daniel Stein was diagnosed with a learning disability at age 4. Wanting to help, Stein’s parents got him involved in sports, thinking a physical outlet might ease some of his hyperactivity challenges.

In Stein’s experience, there was a “clear correlation” between playing sports and improved behavior. He rode his bike to the local YMCA every day and started lifting weights in middle school. “I didn’t know what I was doing, but I loved it,” he recalled.

Fast forward to November 11, 2011, a memorable day for Stein. At the time, he was working as a personal banker. A mentor of his sat him down and told him “he had a vision for my life that came from God. He saw me working with kids and adults that had disabilities,” Stein said. “I really took that to heart, and something just leaped inside of me. Even though it didn’t make sense to me, I pursued it.”

Stein became a certified personal trainer in 2012 at a local gym and had the opportunity to work with a paraplegic client who had a drug overdose at 21 years old and needed to use a wheelchair. Through that rewarding experience, Stein knew he wanted to turn it into a full-time career, so he and his wife started an adaptive fitness studio, Special Strong.

“We left everything behind, invested all of our savings and investments into starting this business in McKinney, Texas, and ever since then, it’s been growing,” he said. “There was such a need for this.”

The concept uses traditional strength and resistance training with specialized equipment adapted to the unique needs of clients. Specific brain-targeted exercises work both sides of the brain, such as top-to-bottom movements that help with emotional grounding and regulation and “crossing the midline,” which helps with better balance and coordination and the ability to multi-task.

The decision to start franchising the concept came after Stein posted a video in 2019 of one of his clients, Brandon, who is shown walking independently for the first time in eight years after working with Special Strong for three months. The video garnered around 10 million views collectively and was picked up by multiple news outlets, Stein said, which prompted a flurry of messages from people all over the world asking Stein where they could find a similar service where they lived.

“I started copying and pasting my answer, which was ‘sorry, we’re not in that area, and I don’t know anyone who is,’’ Stein reflected. “It broke my heart to have to tell so many people that, so our leadership team stepped back and said, how do we scale this business? Obviously, there’s a need, but how do we scale?”

After nixing the idea for strictly corporate expansion because of limited capital, Special Strong filed its franchise disclosure document in 2020 and has grown to six franchise locations open in Texas, including three in Houston and three in the Dallas-Fort Worth metro area. Locations in Arizona and New Jersey are also in the development pipeline.

The biggest challenge was Stein’s lack of experience and knowledge in running a business, plus no working capital, which led to maxing out credit cards.

“Those were really big weaknesses for me I didn’t even know I had until a couple of years into the business, and we were sinking bad,” Stein said. “We couldn’t figure out why we were sinking because we had good revenue, but it never seemed like we had any money. We didn’t know our numbers. The first time I looked at a P&L was three to four years into our business.”

Another challenge for Special Strong was filing an FDD and launching a franchise right when the pandemic began, Stein said. A Paycheck Protection Program loan helped sustain the brand, which saw leads come in organically through LinkedIn.

“We haven’t paid a single dollar in terms of advertising fees for our six franchisees,” Stein said. “I post a lot on LinkedIn, people see our videos and see us working with clients, and for a lot of people it really hits home with them; how can I do something like that?”

If prospective franchisees don’t have a compelling story as to why they want to work with people with special needs, Special Strong does not take next steps with them, Stein said. And although many franchises use return-on-investment metrics to attract operators, Special Strong finds it “unattractive” if candidates are “aggressively asking questions about ROI.”

Instead, Special Strong is focused on finding people who share the company's values, such as putting people over profit. One financially qualified candidate from New Jersey said “all the right things” on the phone and over Zoom, but when he came in for the in-person discovery day and was exposed to working with clients with special needs, he said the R-word about eight times, Stein said. A reg flag such as that warrants an immediate no, even if that person is ready to sign the check, he said.

“We have our entire leadership team present at discovery day. As the franchisor and CEO, I don’t have the final say in terms of yes or no to a person; we have to have mutual agreement amongst our leadership team,” Stein said. “We always tell our prospects—and we don’t say it to scare them but so they understand how serious we are about vetting—that strategically, we only move forward with about 1 percent of candidates.”

“We leave a lot of money on the table, but at the end of the day, we have the right people on the bus.”

The total initial cost for a Special Strong franchise ranges from $59,000 to $70,700, a lower investment because franchisees rent out of existing gyms or train clients at home. Starting next year in the first quarter, Special Strong plans to open its first corporate brick-and-mortar location and add that as a franchise model option.