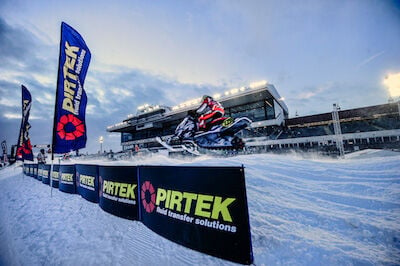 As the rest of the country experiences the bomb cyclone, which we here in Minnesota simply call winter (sorry, rest of the country), we’d like to invite you up to the perfect event for a minus-11 day: The Pirtek Snocross National, scheduled for today and tomorrow at Canterbury Park in Shakopee, a Minneapolis suburb.

According to the good folks at Pirtek, a franchise that provides hydraulic and industrial hose replacement sales and service, snocross is like motocross but with snowmobiles instead of motorcycles. "It involves air jumps and intense action around banked tracks," according to the press release.

"As always, we’re looking forward to the big event with great anticipation," said Craig Heitkamp, owner of Pirtek franchises. "This race is a real fan-pleaser here in Minnesota and we consider it a great privilege having a hand in it."

In addition to Pirtek’s sponsorship of the entire series and the signature event in Shakopee, Heitkamp is a yearly sponsor of the Hentges racing team that participates in the competition. The team drivers are Kody Kamm and Petter Narsa; Kamm placed first in last year’s series finale.

Will I be there, you ask? Heck no. I’m a North Dakota native and a 30-year resident of Minneapolis, so I’ll do what all the hardened citizens of the Bold North do during bomb cyclones: I won’t go anywhere unless they have valet parking.