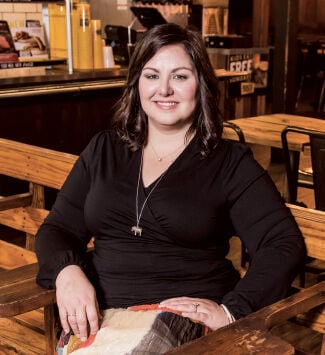 “I’m freakishly bad at cooking, which is funny being in the restaurant industry. I can follow a recipe and it still comes out as a C average experience.”

Hopefully Melissa McCarthy. I think she’s so funny and I genuinely enjoy her. I’ve loved her in everything she’s ever done. She’s so relatable and has such a great sense of humor. My favorite is ‘Life of the Party’—I can cry-laugh every time I watch it, even though I know what’s coming next. It’s not Shakespeare, but it’s really enjoyable.

Raising Cane’s, I love their brand. And I’m also a big fan of Mutts (Canine Cantina). I love them both as a consumer and a guest. For Raising Canes, the product, the chicken is so good, and Mutts, we have three dogs and love going to the location in Dallas. We have two pugs, Kellyanne and Carmen Miranda, and a Chihuahua mix, Charo.

I would open a steakhouse, absolutely, and I would call it Deckle and Hyde. I love a good, traditional steakhouse that has that old world feel.

I was born in Wyoming and my first job was mucking stalls. And I hate flying. Any time I can, I will avoid flying. It’s probably a control thing.

Reading. I read at least an hour every day. I usually have three books going. I just finished ‘The Dragon Behind the Glass’ about the illegal fish trade. And I just started ‘Who Cooked Adam Smith’s Dinner?’.

What’s one restaurant or food trend you wish would disappear?

Frozen yogurt. I would just go straight to ice cream. I feel like it’s cheating the ice cream experience. There are surprisingly still more froyo shops around than I would have thought there was a base market for.

In Croatia—and I love the country, I love everything about it—but there were these handmade sausages that have a really funky sauce on them. They’re called Cevapcici and yeah, they’re this traditional dish but just not for me.

Ketchup. I know people have such a passion for it, but for me, if you put ketchup on things, that’s all you taste. There are so many better things to do with a tomato.

I’d say ‘Schitt’s Creek.’ I’d want to be Stevie just sitting behind the desk and watching it all happen.

I’m freakishly good at remembering things. I’m freakishly bad at cooking, which is funny being in the restaurant industry. I can follow a recipe and it still comes out as a C average experience. I’m really good at taste testing and making reservations.

I would immediately stockpile my favorite sunscreen, it’s called Barbara Sturm Sun Drops. It’s magic, I love the product. And also Gatorade. That would terrify me if they ran out of Gatorade.

Fake it ‘til you make it. My first boss at Murray Brown Creative Group … I was the intern, going into my senior year of college and one of the ladies called out sick and he needed me to go to a meeting with him and before we walked in he told me, ‘they don’t need to know you’re an intern.’ You have to lean in and try it and then you’ll gain the experience.