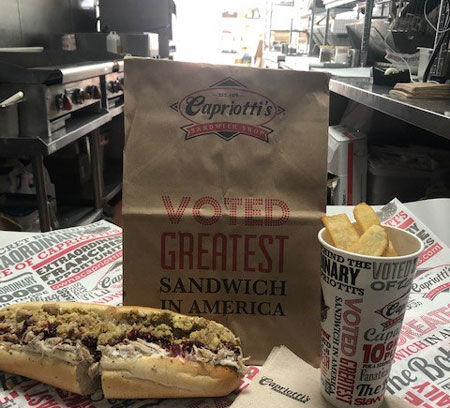 Capriotti's famous Bobbie sandwich inside one of its ghost kitchens.

The hype around ghost kitchens and virtual brands is just about deafening as restaurants look to these new channels to help fill the COVID gaps, extend concepts and push marketing and market potential.

Capriotti’s is also excited about the potential, but as David Bloom, the concept's chief development and operations officer said, the company isn’t jumping in without some forethought.

"I’ve been seeing a lot of brands pivoting during the pandemic. I can’t imagine having to pivot in the midst of a crisis," said Bloom. "This was in the roadmap, we had national agreements with the delivery providers, but also with CloudKitchens, Kitchen United and Reef."

The latter are the three biggest ghost kitchen operators. So far, the company is selling sandwiches out of three such kitchens, two in the Los Angeles area and one in Columbus, Ohio. He said each company has its own strategy and strengths—and some unique difficulties during the COVID-19 pandemic.

"CloudKitchens, Kitchen United and Reef all have pretty differentiated models. We believe they all have a place in the market. I’d say that’s why we did agreements with all three. Kitchen United has 40 percent of our revenue is walk-in ordering off the kiosk and they’re in higher-traffic areas in a little more upscale areas with a good mix of residential and weekend traffic," said Bloom. "CloudKitchens have picked more low-rent areas targeted toward those high-density, downtown L.A. or USC [University of Southern California] areas like that. They’ve been more impacted because they really targeted those high-density areas that aren’t as high dense today."

Reef, on the other hand, operates more like an Aramark or Sodexo, big non-traditional operators. The company owns more than 4,500 parking facilities and operates ghost kitchens out of unused space, but licenses the brand.

Bloom said aside from that outlet, the company is bringing the concept to franchisees, but not as a single unit. Instead, he said the company views such outlets in context of a market strategy as any other non-traditional location.

"When you’re looking at a ghost kitchen, to staff it, it helps to have a restaurant nearby so you can flex the staff and train people and manage inventories," said Bloom. "And from a marketing standpoint, there’s a lot of efficiencies. We look at it as a market plan as opposed to having one ghost kitchen."

To get some innovation-minded franchisees into the model, he said the company is waving development fees and giving a yearlong royalty holiday for sales coming out of ghost facilities.

"That was really well received and helped us accelerate," said Bloom. "A lot of the best ideas come from the people out operating shops around the country, and we have some great partners helping figure it out."

He said the ghost facilities cost less to build out, but do offer lower volume of sales. The balance there means after the initial no-fee, no-royalty push, they will carry the same fees and royalties as a standard location.

Virtual operations were also on the roadmap and they’re being tested right now in corporate locations. Bloom said the company is testing a vegetarian brand to highlight its Impossible meat sandwiches and other vegetarian options, and there is a Philly cheesesteak brand and a turkey-focused brand named Angry Pilgrim. The virtual brands help target customers that are searching for specific menu items from Capriotti’s but that might not think of them as a vegetarian brand or to ensure the company shows up in those specific searches without adding additional ingredients. They’re using it to hit some lifestyles, too.

"The vegetarian brand is probably the most obvious. It allows you to be really targeted and efficient with your product today. And it allows you to be a little more risqué," said Bloom. "We have one that’s targeted, that’s a cannabis-oriented brand. That helps us target people that like that lifestyle. We can target them outside of our existing locations, which would be very confusing."

He said both paths to digital, off-premises orders have been successful and developing the operational wisdom therein keep Capriotti’s plugged into the potential major efficiency gains that come at the intersection of ghost kitchens and virtual brands.

"When I think about CloudKitchens with 30 to 50 restaurants under each roof, and virtual brands under each of those, you’re looking at 100-150 brands under one roof, there are efficiencies there," said Bloom. "The drivers themselves can say, ‘I can just sit outside that location and I’m guaranteed four to six deliveries an hour, so I’ll just sit there."

As the ghost kitchen operators continue to innovate the model, it puts the company in the mix with all sorts of converging technologies like embedded sensors, autonomous deliveries, shared robotics and whatever else the nerds are building in their garage today.