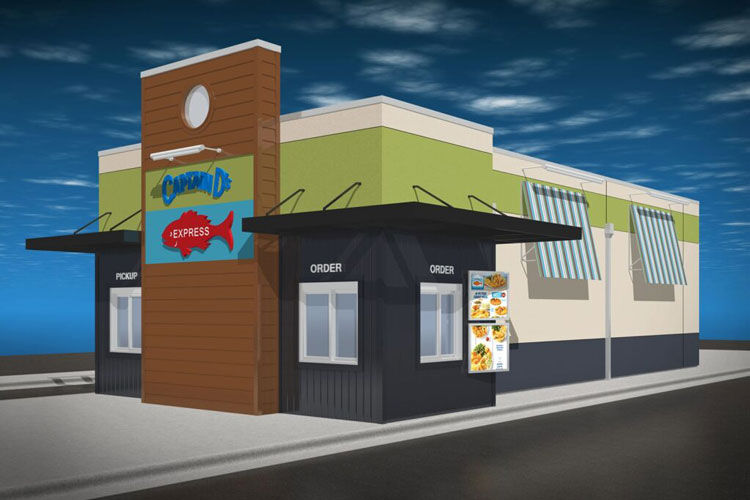 Captain D's express model has a drive-thru and pick-up window, but no inside seating.

There has been a surge of new restaurant prototypes looking to capitalize on the shift away from dine-in service—regulated or not. As the restaurant industry looks to cut wasted space, it's important to remember the vaunted express models with no seating or drive-thru-only concepts aren't going to work everywhere.

Phil Russo, the VP of real estate at Captain D's, said the drive-thru at the franchise proved helpful throughout the COVID-19 pandemic. A new express model with just a pick-up window and drive-thru is leaning into that potential for the right markets.

Some franchisees are eager to build the high-efficiency model, but another new prototype splits the difference between traditional and to-go only. That was something Russo said was already in the works.

"Before the pandemic even was a thing, we had actually started working on taking our typical 44-seat building and scaling it down a little bit," said Russo. "For us it's all about lowering the investment, so the franchisees are able to make more money."

The midsize model has 22 seats and reduces the plot size to 0.6 of an acre. The express can get down to 0.36 of an acre. Without any seating, however, that's not going to work in busy trade areas where people want to shop and eat, or in rural areas—neither are places that people want to munch fries in their car.

"We still feel that there will be a need for seating and we'll still have our 44-seat prototype. We think 22 is a nice middle ground and that’s the prototype we're pushing a lot going forward," said Russo.

There's plenty of pull, too, from franchisees looking to reduce the footprint and the investment but keep a dining room. Three are already on tap for 2021.

The key for the express model is high density and a mobile customer base. It also comes with some caveats: the menu is focused on just seven or eight top-selling items to keep customers waiting as little as possible. That also means there's no grilled-fish menu, an important component in many places and a helpful no-veto healthier option.

"We are finding that our restaurants trade a lot further than we thought we did. That’s good for us to understand, you're still going to get the core 80 to 90 percent in a one- or two-mile radius, but we do have people, especially in small towns, that will come from 10 or 15 miles away. It's amazing," said Russo. "People will drive to get to their Captain D's, they know the quality."