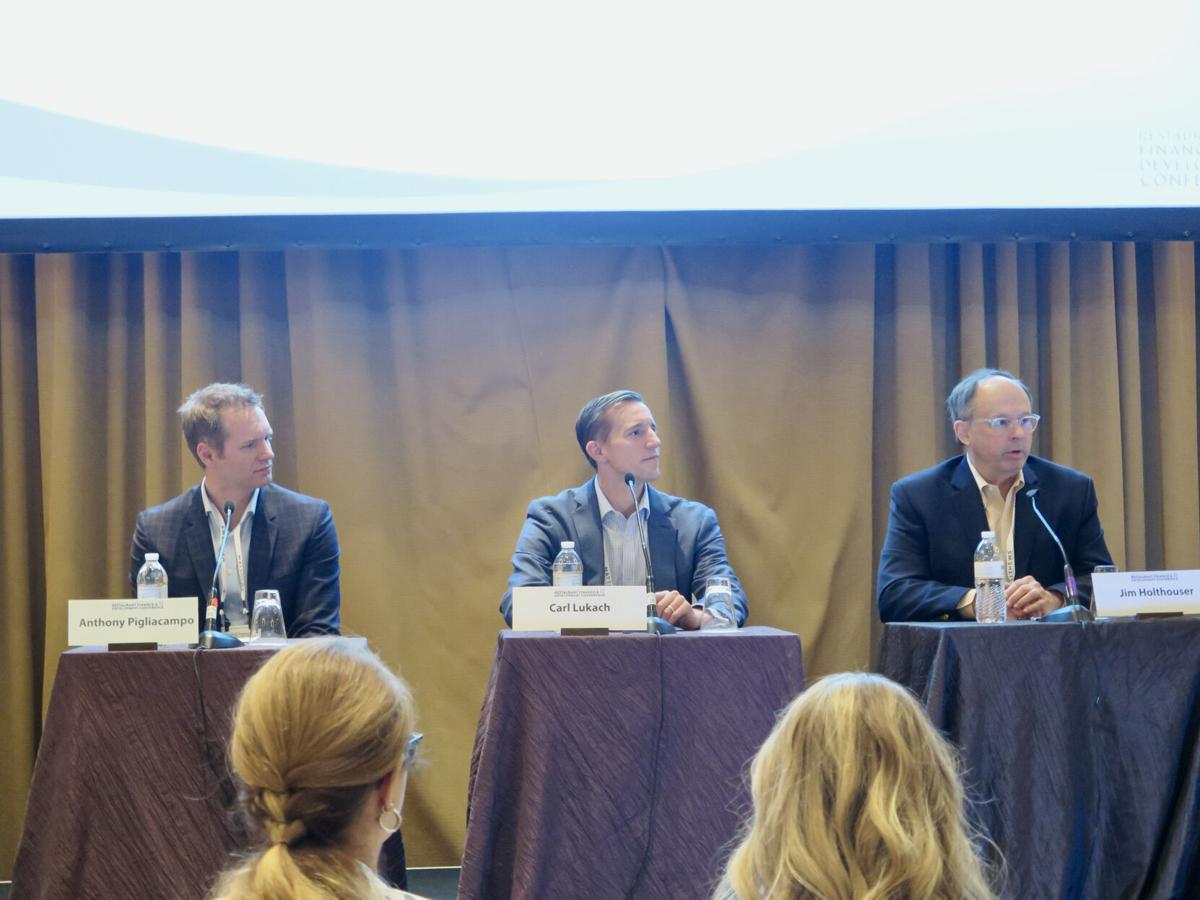 From left to right: Anthony Pigliacampo, co-founder of Modern Restaurant Concepts, Carl Lukach, CFO of Noodles & Company, and Jim Holthouser, CEO of Focus Brands, spoke as panelists on "Keeping it Fresh: Leading with Outside-the-Industry Strategies" during the final day of the Restaurant Finance & Development Conference.

Carl Lukach admits he did not show up as his “authentic self” in former roles, particularly in the financial services industry. He donned the proverbial suit and tie, but didn’t feel comfortable coming out as a gay married man. But when he joined Noodles & Company as chief financial officer in November 2020, he was able to be very vocal because the brand—and the foodservice industry as a whole—encouraged employees to show up as their true selves, he told the audience this morning on the last day of the Restaurant Finance & Development Conference.

One of his first assignments for the fast-casual pasta chain with more than 450 units was to figure out how the brand could scale more efficiency. Noodles & Company looked at having one bathroom instead of two, which Lukach saw as an opportunity to not only save money on buildout costs, but also provide inclusivity for all customers—a core value. On the front of the restroom was a sign that read “male, female and trans,” which caused some backlash on social media in June. Pennsylvania State Rep. Aaron Bernstine posted that he and his family would not be eating at Noodles anymore.

“With that decision, I said we can either lean away from this or lean hard into this, and I felt in the restaurant space, I could really lean in,” Lukach said. “It’s been really exciting to be in an industry where you can value authenticity and it’s part of our core values.”

Lukach spoke at a panel with other executives who came from outside the restaurant industry, including Jim Holthouser, CEO of Focus Brands (parent of Auntie Anne’s, Cinnabon, Jamba and more) and Anthony Pigliacampo, co-founder of Modern Restaurant Concepts, franchisor of Modern Market Eatery and Lemonade restaurant brands. Holthouser spent the majority of his career in the hotel and hospitality business with some experience in the gaming industry, while Pigliacampo has a mechanical engineering and product design background. The panel was moderated by Bill Bishop, partner at Grant Thornton.

Holthouser and Pigliacampo both noted their surprise at how far behind the restaurant industry was in terms of investing in data and analytics. “Every other industry got the memo, that if 50 percent of your business is going digital, you got to make an investment in that, you can’t let it organically evolve,” Pigliacampo said.

Holthouser added when it comes to digital platforms, he estimates restaurants are probably 10 to 15 years behind the gaming, hotel or airline industries—but that’s changing very quickly. For Focus Brands, it made large investments in infrastructure and completely retooled its supply chain, plus there’s a priority on integrating technology solutions the company can scale across seven brands. “We’re figuring out how to unlock a lot more value for franchisees, that’s the power of the portfolio,” he said.

“It took me a decade to learn that in the hotel business,” Holthouser continued. “The nice thing about coming over here is we don’t have to make those mistakes twice.”

“It’s customization and optimizing, and exclusivity," he continued. Loyal return customers "will get something different than someone who just came for the first time. I’m surprised the restaurant industry isn’t further along in that aspect. Fitness was further along.”