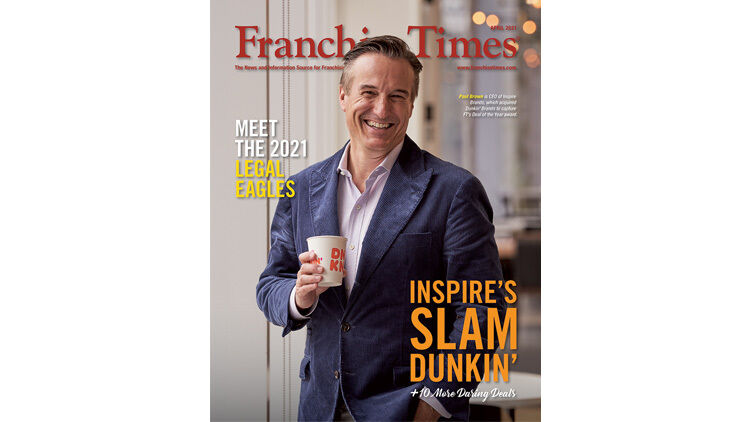 Paul Brown, CEO of Inspire Brands, on the cover of the April issue of Franchise Times.

Paul Brown, CEO of Inspire Brands, appears on the cover of Franchise Times April edition, published today, along with David Pipes, CFO, and other members of the deal team. “It’s an iconic brand. It’s just a wonderful brand to add,” Brown told Franchise Times in an earlier interview.

“It’s huge,” Pipes said about the significance of the purchase for Inspire. “They’ve got over 20,000 restaurants and $11.5 billion in systemwide sales,” plus 10 consecutive years of same-store sales growth.

Ten other Franchise Times Dealmakers winners are featured in the April issue of Franchise Times, with details about how they attracted their new suitors and now available in print and online, at franchisetimes.com.

They include Aurify’s purchase of Le Pain Quotidien and Maison Kayser out of bankruptcy court; the recapitalization of Taco Bell franchisee J.A. Sutherland; the purchase of The Habit Burger Grill by Yum Brands; and the $2-billion purchase of chicken chain Zaxby’s by Goldman Sachs.

Many of the winning dealmakers will also be featured during Dealmakers Week, April 19-22, during eight sessions devoted to dissecting trends and topics in franchise mergers & acquisitions. A presentation of all 2021 Franchise Times Dealmakers winners, typically done in person but this year virtual, will highlight the final panel.

"These dealmakers are smart, creative and most of all relentless in finding the capital they need to grow their companies," said Franchise Times Senior Editor Beth Ewen. "Our panel of judges, all experts in franchise finance, noted the persistence and creativity needed to land the boldest deals in franchising, especially in 2020, the year of the pandemic."