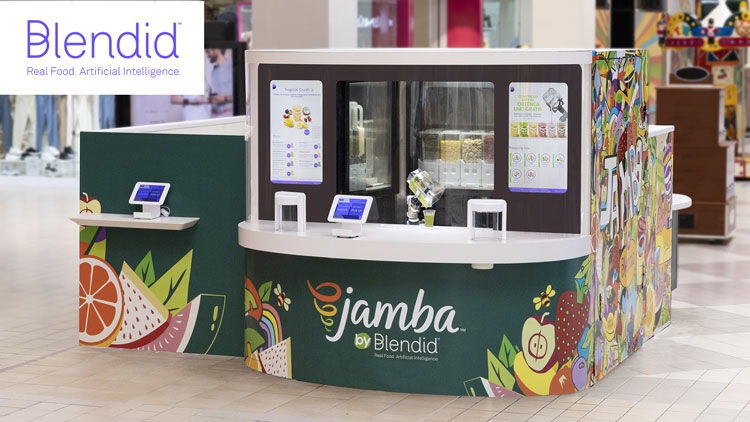 At the bleeding edge of robotic restaurant operations, Blendid and Jamba are rethinking the smoothie bar and learning some interesting things.

Jamba rolled out the automated smoothie machine back in October, the second such device since opening in a Walmart location in 2020.

Blendid is essentially a robot arm surrounded by a bunch of blenders and chutes of fruit, veggies and other mix-ins. The arm grabs a cup, collects the goodies and blends it all up, delivering pre-made or custom smoothies. As with many robotic-arm concepts, there's a hearty dose of novelty. Blendid co-founder and CEO Vipin Jain said that does wear off and then it's all about the product.

"The novelty is going to wear off. After the second or third try, you just want your food," said Jain. "This is something we have been very strongly opinionated about from the get-go. We should not build a product for novelty. Robotics is a means to an end, not the core business. It helps people come in, but the product has to resonate from both the expectation and the cost for them to reengage. We see strong repurchase behaviors at all our locations."

He said roughly 66 percent of orders at the University of San Francisco come from highly engaged customers who have worked a Blendid smoothie into their day-to-day walk to class or work. In a mall location, there's more of the novelty, but mall staff gravitate toward the machines at all hours of the day.

"That was one so overwhelming for me. After we launched and this janitorial staff, a person that works most of the nights, he came and said thank you for being here, and he was actually the first customer before we had even launched. We left the machine on overnight and he just came and ordered and got his drink. So that was very satisfying to see that happen," said Jain. "Serving the mall in the wee hours, we didn’t imagine that as the use case."

For anyone who has worked late nights—QSR hours and not much else—something like a healthy smoothie at work is a dream come true.

There were some other learnings for the robot, too. The device went viral when a customer captured it spilling a smoothie and generally not looking very futuristic. Jain said the vast majority of problems are solvable remotely, but user error can cause some havoc with the new technology. So far, the new device has not had any more viral failures.

Jamba released a statement to Newsweek around the video saying it's still a work in progress.

"We are currently testing our new Jamba by Blendid kiosks and as you see in the video, the robot is still learning how to perfect its smoothie-making skills!" read the statement.

There are still some bugs to work out, no doubt, but Blendid is looking to expand much further as it learns. The company just wrapped up its second crowdfunding round, raising $1.4 million on the investment platform Start Engine. It raised $1.9 million in a prior round. The funding will go toward more scale and investments in the team. So far, the company has raised just over $20 million.