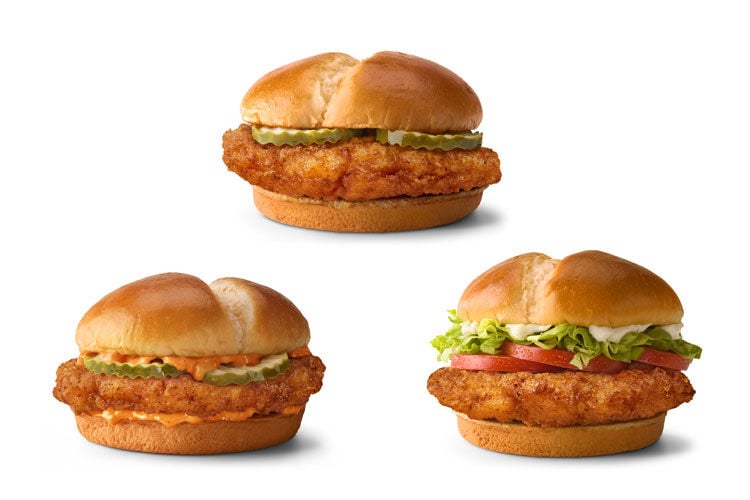 In just the last month, Habit (acquired in 2020 by Yum Brands) launched a sandwich and new chicken bites, while Jack in the Box introduced two new chicken sandwiches. Wendy's launched a new sandwich back in October. And industry eyes have been awaiting McDonald's entry into the fray for the past several months.

McDonald's USA President Joe Erlinger said in a virtual investor update in November that this is much more than a menu update.

"Chicken is at the heart of our growth strategy," said Erlinger.

A classic crispy chicken sandwich looks a lot like what you might see at Chick-fil-A, where the core of that menu drives a roughly $5 million average-unit volume for the concept. The latter two offerings look a lot like what turned Popeyes into a blockbuster sandwich sensation in 2019. McDonald's is clearly looking to hit on all cylinders with the new chicken sandwich platform.

"Our goal is to strengthen our chicken credibility. Our chicken-only competitors here and abroad have strong brand equity and credibility," said Erlinger. "Developing a reputation for great chicken represents one of our highest aspirations."

Why attempt all three at the same time? Erlinger said in testing, surveying and consumer outreach, no one chicken sandwich would fit all tastes in all markets. The broader launch would "jumpstart our chicken journey," said Erlinger.

Analysts see the chicken sandwich with varying interest. Dennis Geiger at UBS said the "likely impactful new chicken sandwich launch" would be one of the key drivers of a 7.5 percent same-store sales growth number for 2021.

Peter Saleh at BTIG said the platform "fills in what has been a competitive gap and seeks to build on the recent success of spicy chicken nuggets, which helped deliver double-digit comps in September." But he doesn't see them as all that innovative, and success will heavily depend on the marketing.

Andrew Charles at Cowen holds an "outperform" rating for the company stock and said one key power for this launch will be learnings from abroad.

"For instance, MCD indicated that core burger enhancement learnings from Canada and Australia will help shape U.S. enhancements. Further, the premium chicken sandwich launches in the Netherlands and Germany will similarly help shape the U.S. launch in early 2021," wrote Charles.

That could mean a less fraught launch than the Popeyes chaos when sales spiked.