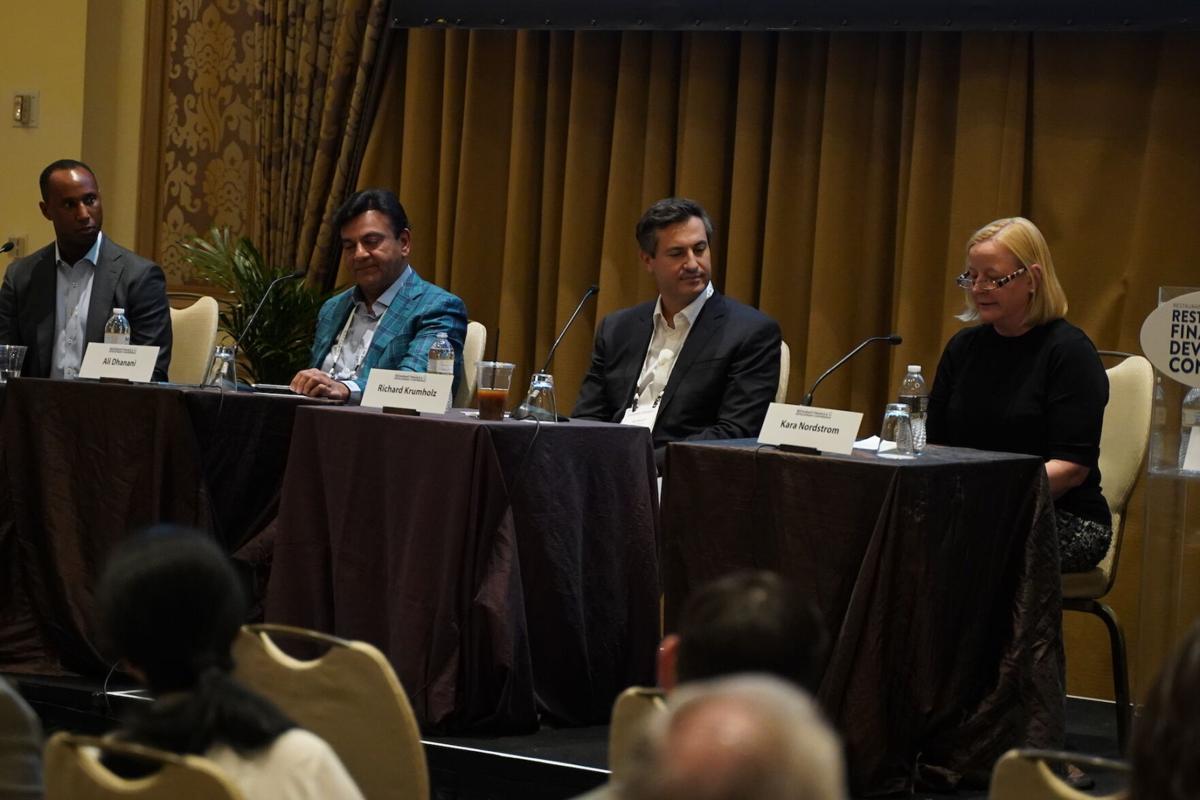 Collectively, the franchisees on stage operated 916 restaurants across four brands, and speaking November 9 during a wide-ranging session at the Restaurant Finance & Development Conference, they shared their paths to multi-concept ownership and advice for getting there.

“My path was already carved out for me,” said Ali Dhanani, CEO of Haza Foods and Haza Bell, owner of 380 Wendy’s stores and 136 Taco Bells, respectively. Dhanani, whose father, Hassan Ali Dhanani, and other family members built The Dhanani Group into a billion-dollar franchisee of Burger King, “kept knocking on Wendy’s door,” and in 2012 had the opportunity to buy 34 restaurants in the Houston market.

Kara Nordstrom, meanwhile, CEO of 138-unit Popeyes Louisiana Kitchen franchisee Sailormen, joined the company 20 years ago and later bought out her partner. Rich Krumholz, co-CEO of Delight Restaurant Group with brother Andrew, said they loved Wendy’s and Taco Bell and simply started with the goal of being great operators. They’ve since grown to 129 Wendy’s units and 27 Taco Bells.

And for Chris Johnson, CEO of Rackson Restaurants, he “chased Wall Street” but was drawn back to the industry he grew up in as his father, Ron Johnson, built a portfolio of KFCs. Chris Johnson founded Rackson in 2013 and has 52 Burger Kings and one Popeyes.

“You naturally get to that point where you’re sitting on lots of talent” and start looking at new brands to create opportunities for leaders in the organization, he said of the hunt for other brands.

On the topic of labor and incentivizing employees at the restaurant level and above, Dhanani said the “hanging carrot” of cash is important, and he uses an aggressive monthly bonus plan to motivate restaurant managers and others. His Haza companies didn’t used to share P&Ls with restaurant managers, but “since we started sharing it, we’ve seen a lot of, they take ownership of their restaurant, they track it and we bonus off of that.”

There are also clear opportunities to move up in the organization, he said, giving the example of a shift manager who in six years became a vice president of operations. “In this organization, you write your own destiny,” Dhanani said.

Nordstrom noted her general managers “are each running a $2 million business,” and their bonuses are also paid out based on P&L performance. Equity is also a motivator.

Johnson began issuing equity to certain individuals at Rackson, “and you watch the shift in decision making.”

“They’re owners. It’s one thing to say I want my team to think like owners … it’s another for them to have access to all of our financials,” he said.

As they’ve grown, the franchisees all agreed their relationship with their franchisors has remained integral to their success.

From day one, “be transparent on what your vision is and your plan to service the obligations,” said Johnson as he explained solid operations ultimately help build credibility when it’s time to start talking to other concepts. “Here’s what I did when times are good and here’s what I did when times are bad … that’s when brands will start knocking because they can see what you’ve done,” he said.

Krumholz and Nordstrom each emphasized communication with and alignment of the growth vision for both franchisee and franchisor.

“For us, all the research is really done before picking a brand,” said Krumholz. “Because once you do join it, you have to be all in.”

And Dhanani’s advice for making the franchisor happy? “Remodel and new development, you can’t go wrong,” he said.