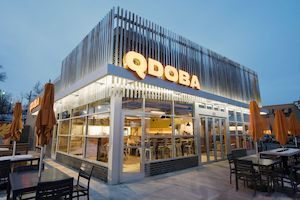 Keith Guilbault used to work for Jack in the Box when that brand owned Qdoba and franchisees waged a revolt to oust its chief executive, among other disputes. After more than two years as CEO of the spun-off brand, he's now rolling out a plan to grow Qdoba again, and is on track to open 30 stores this year.

"It's been great, honestly," he said about the spin-off from the publicly held Jack in the Box, in March 2018, to Apollo Global Management. "When the review of strategic alternatives was announced for Jack in the Box, I will tell you in all honesty I was one of the happiest people. I knew Qdoba was never going to realize its full potential being the small brand under the umbrella" of JITB, with more than 2,200 restaurants in 21 states and Guam.

"It's been a lot of work to build the team. Right now we're poised to grow," he said.

Guilbault was COO of Qdoba and before that VP of franchising for Jack in the Box. Earlier, he worked for a tech start-up and for a gasoline retailer, "which is heavily franchised."

He lived through franchisee uprisings at JACK, which culminated in a call to oust then-CEO Lenny Comma. He says the turmoil informed how he interacts with franchisees at Qdoba.

"The franchise business, it's not for the timid. It's something that needs—I'll just use a food word—nourishment. You have to really work with the franchisees. One of the best compliments I've received is that we are good listeners," he said.

Guilbault said he has planned calls every two weeks, called "brand touchpoints," plus he "randomly" calls franchisees every week. "I just go down the list and say, 'I haven't talked to so-and-so for a while.' When I first did that, they'd say, 'What do you need? What's going on?' Now they know" he just wants to touch base.

Qdoba hired 110 people since Guilbault took over, positions made necessary because of functions formerly performed by Jack in the Box people. The chain has 735 restaurants open, up from about 700 that was the count at Qdoba for years. Average unit volumes were $1.21 million in 2019, up from $1.17 million in 2018 and $1.14 million in 2017, the company said.

Guilbault says franchise sales activity "over the past two months has exceeded all of the activity in the prior two years. We just signed a deal for San Diego and San Jose," in California. "We recently signed a new deal in Canada and we have a number of conversations going on right now. We do have some great new operators in Long Island, a new operator in Atlanta and Alabama." Franchise Times will cover some of those new operators in an upcoming print edition.

The pandemic is not slowing the pace. "The large franchisees that we're talking to are looking at this time opportunistically. They're looking at, 'Hey, I'm going to be able to get a second-generation piece of real estate at a much lower cost than I would have seven months ago. I'm going to take this,'" he said.

In short, you could call Guilbault bullish. "I'm a super optimistic person but I will tell you that, this space that we're in and the work that my team has done to prepare the company for growth, it really is very exciting," he said. "We have a great sounding board with our existing franchisees, and they'll tell it to you straight. And we love that. They make us better."