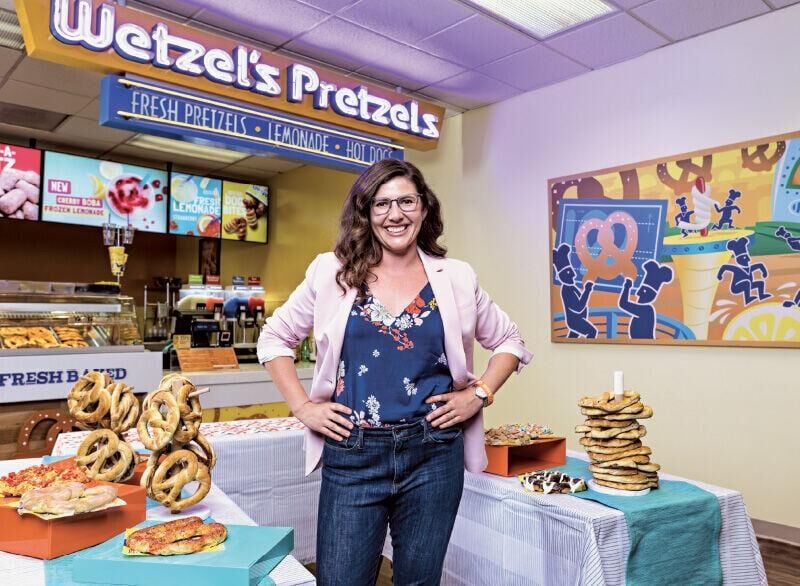 Wetzel’s Pretzels CEO Jennifer Schuler, pictured here in the company’s Twisted Kitchen lab, told the audience at RFDC the brand is contemplating a future without malls as it experiments with heartier menu items.

But while the buildings may remain the same, the operations, digital presence and branding are all up in the air.

For Mandy Shaw, the CEO of Blaze Pizza, the journey to the restaurant of the future began ahead of schedule. She took over as CEO in November 2019, mere months before COVID-19 would upend the world economy.

Shaw said speed had been crucial to intra-pandemic success. When dining rooms closed, she said it only took Blaze three weeks to implement curbside pickup, and added a third delivery partner, Uber Eats, in just two weeks. Going forward, she said speed is an important differentiator. “It’s all about fast testing and listening to the customer.”

Watson and Shaw were joined on stage by Jennifer Schuler, CEO of Wetzel’s Pretzels, with Aaron Noveshen, CEO and founder of Culinary Edge, a food and beverage consultancy, as moderator. Together, the three panelists represented more than 1,000 restaurants across the United States.

Schuler said COVID-19 forced Wetzel’s, an iconic snack brand, to consider a future without malls. The company is experimenting with heartier, protein-based menu items to help it transition from an impulse buy for shoppers to more of a “destination location” where customers can get a meal.

Moving into meals is one thing, but Schuler emphasized Wetzel's is staying true to its pretzel roots. Adding to the menu is a creative project, and "any really good creative project has really tight parameters and you can stay within parameters,” she said. That means adding pretzel-based "mini meals," such as the pretzel pizza, not buying a fryer.

Shaw emphasized the need to match a brand’s digital presence with the in-store experience. For Blaze, that means customization. She said the company recently redesigned its app to be more visual and more interactive, mimicking the experience of seeing and choosing ingredients in-store.

Noveshen’s slides included the iconic “app-uccino” order from Starbucks, a digital coffee order with 13 different customizations. For some consumers, online ordering is an opportunity for even greater customization, he noted. The key is to design an ordering system that allows customers to customize easily.

All three executives emphasized the need to stay connected with front-line employees. Watson said it’s “all about direct communication” and being present in the stores. In addition, he said he circulated his cell number and email address, so employees could contact him, and implemented “chat with Charles,” a direct line of communication that’s less intimidating than writing a formal email to the company CEO.

Schuler noted the need to act on employee feedback. “If you ask for it and you don’t do something with it, consider that interaction done,” she said. Conversely, by consistently following through on staff suggestions, executives can create a virtuous cycle.

While online systems can throw off a huge amount of actionable data, both from customer surveys and the orders themselves, Shaw cautioned against over reliance on that easy data source. Online systems leave out dine-in customers and the in-store staff, said Shaw, both important stakeholders for many restaurants.