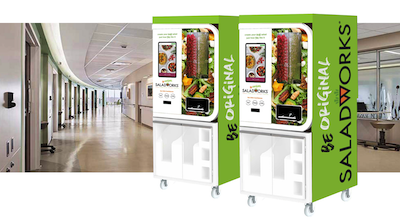 Sally, a temperature-controlled robotic salad maker which debuted from Chowbotics in 2018, will contain the menu, ingredients and pre-made recipes from Saladworks.

Eric Lavinder thinks salad bars are a thing of the past and fully embraces the future: robots, of course. The vice president of development for Saladworks, a quick-service, made-to-order salad franchise, spent the last six months talking with Chowbotics, known for its robotic salad maker. The 3-square-foot machine, nicknamed Sally, allows customers to build their own salads from 22 toppings and takes about 70 seconds to make.

"I think most people would go up to a salad bar pre-COVID. They can grab the stuff they want, put it in a bowl. Well now, I think people are thinking, how long as that food been in there? Who’s touched it? Is it safe?" Lavinder said. "Now, which one would you go for? I think most people would now go to the self-contained, sanitary robot that no one has touched. We’re seeing the evolution of how it changes the environment around them, and we’re betting on that."

Based in Conshohocken, Pennsylvania, Saladworks was founded in 1986 and sold its first franchise agreement in 2002. With 35 franchisees, many of them multi-unit owners, the brand opened 27 locations this year, bringing the total to 117 across 18 states and two countries. Saladworks plans to launch 10 locations in Canada this fall.

Lavinder joined the brand about two and a half years ago, and immediately began looking into non-traditional spaces and innovations. He came across Silicon Valley-based Chowbotics last year and reached out, but at the time, they were already working with a smaller salad concept and Lavinder didn’t want to interfere. To date, Chowbotics has served more than 185,000 meals from more than 100 robots.

"As we talked the last six months, we really developed rapport and worked hard together as companies to find locations. Their biggest struggle is finding locations for a Sally," Lavinder said. "People don’t really know what that is, there’s no familiarity, no knowing what their salads are, no name brand. It struck a chord that we were basically going down two different paths and we realized, why don’t we partner completely? Let’s do this together rather than apart."

The weekly calls began three months ago, focused on logistics and finding opportunities to place Sallys in hospitals, universities, grocery stores, airports and even large high schools. The temperature-controlled robotic salad maker debuted in 2018 with a touchscreen interface and will contain the menu, ingredients and pre-made recipes from Saladworks. Each order is accompanied by instant nutritional information to accommodate any dietary restrictions, and Sally takes credit cards and Apple Pay, plus it runs 24/7, which is ideal for a hospital environment, Lavinder said.

"There is a lack of available food in those places," Lavinder said. "Think about doctors working third shift, and the cafeteria is only open certain hours, plus most cafeteria food you don’t really want anyway. Sally gives you the opportunity to make whatever salad you want, and it’s reasonably priced and not marked up."

The general focus and goal of the project and partnership, Lavinder said, is to add more verticals and revenue streams for franchisees. Three Saladworks ‘zees are planning to launch Sallys soon in a few large teaching hospitals in Philadelphia, and since Sallys are mobile and fairly inexpensive, Lavinder said he can easily see franchisees launching five to 10 and strategically placing them around their protected territories.

"You have to zig and zag to figure out where you’re going to grow. You can’t just sit and wait for brick and mortars or airports to come back, you have to find somewhere else to grow, and Sally is a part of that for us," Lavinder said. "We’re doing a significant amount of testing in new verticals, and there’s the chance that one or more might not work, but if you never try, you'll never know. And that happens, but you gotta be willing to try, even though it’s laborsome."