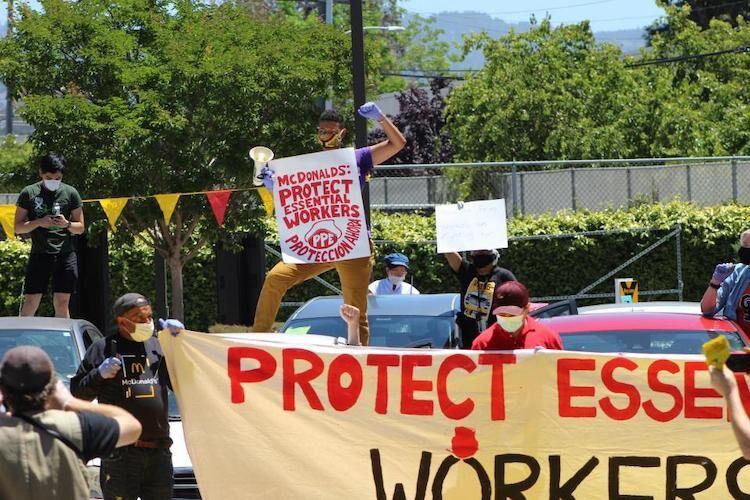 A strike for protecting essential workers last year in California, where a new law will establish a 10-person council to set fast-food workers' wages as high as $22 next year.

California Gov. Gavin Newsom signed the new FAST Recovery Act into law yesterday, on Labor Day, creating a government-appointed 10-person council to set wages as high as $22 an hour starting next year at fast-food chains with more than 100 units nationwide. The council, which will include fast-food workers, will also set working conditions and address alleged worker abuses that advocates say soared during the pandemic.

"The bigger issue is, where is this going?" said Darrell Johnson, CEO of Frandata. " I think we all know, this is the first foray" by Service Employees International Union to organize fast-food chains. "They were successful with this, and how much further can they push the envelope? And to push the envelope, they have to in California change, 'We didn't mean fast food, we meant everybody.'"

And then, "if somebody starts looking at this and saying well, how about these other states where we have friendly legislatures to accomplish this sort of thing?" The law "has the potential to expand by definition from California, and more broadly," he said.

"This will take a while, I suspect, to see how it will roll out. And it could be, as it's playing out, it gets so messy that legislators decide maybe this wasn't such a good idea, or businesses start literally shutting down and exiting California. If I were a brand and looking at expansion and not yet in California, I wouldn't go now," he said.

"I don't think anyone knows the cost of this FAST Act is going to be. But I think we can clearly say, this act will impose costs on any business in that 100+. The question is, is it a minor cost, or is it a death-defying cost on businesses? I don't know what that answer is, but I think we're going to find out, because it will seriously undermine the businesses that are out there operating," he said.

Greg Flynn, CEO of Flynn Restaurant Group that owns 105 restaurants in California, was among those expressing opposition to the FAST Act.

Service Employees International Union President Mary Kay Henry called the new law "a watershed moment for working people," at a rally outside the Capitol yesterday in Sacramento, according to Cal Matters.  "California fast food workers have set a new model for workers having more power across their industry."

Newsom, a Democrat, said in a statement, "Today's action gives hard-working fast-food workers a stronger voice and seat at the table to set fair wages and critical health and safety standards across the industry. I'm proud to sign this legislation on Labor Day when we pay tribute to the workers who keep our state running as we build a stronger, more inclusive economy for all Californians."

The International Franchise Association lobbied hard against the FAST Recovery Act, also known as AB 257, and issued a statement after Newsom signed it into law. "This bill has been built on a lie, and now small business owners, their employees, and their customers will have to pay the price. This bill is a fork in the eye to franchise owners and customers at a time when it hurts most," said IFA President and CEO Matthew Haller.

"The FAST Act was designed to hurt the franchise business model in California, and that is what it will do. IFA will not stop fighting to ensure other states won't suffer from the harm that California has started."

The IFA continued: Recent research from UC Riverside shows that AB 257 could increase prices as much as 20 percent for California restaurant goers. Given that AB 257 will increase costs for consumers and harm local businesses, less than one-third of Californians support this bill. Moreover, the Employment Policies Institute released a new survey of U.S. labor economists, which found that 83 percent oppose AB 257 due to deep concerns about the negative impacts of this bill on fast-food industry growth, jobs, and price inflation.

An earlier version of AB 257 would have held franchisors jointly liable for violations of labor law along with their franchisees; that provision was stripped from the final version before it went to the Senate for a vote. The earlier version also had 30+ units as the size break, which was raised to 100+ units in the final bill.

On January 15, 2021, Assemblywoman Lorena Gonzalez introduced the FAST Recovery Act, which stands for Fast-food Accountability and STandards, according to the SEIU. On that same day, the Los Angeles Times and the Reveal team for the Center for Investigative Reporting published a "shocking read, filled with stories like Yamile's," the SEIU said on its website.

"Cashier Yamile Osoy, 26, developed such severe COVID-19 symptoms that she told her shift manager that she felt sick and wanted to go home. According to her complaint, he ordered her to lower her mask so she could breathe easier—and finish her shift," the LA Times/Reveal story said. There weren't enough masks, "so managers told workers to improvise, offering up a box of dog diapers somebody had left in at the store."

The LA Times/Reveal story continued: "A lack of protective equipment and social distancing and pressure to work at all costs have persisted deep into the pandemic, according to a review of summaries of 1,600 complaints to the Occupational Safety and Health Administration concerning the coronavirus in the nation’s fast-food industry, along with 200 additional accounts found in health department records, lawsuits and news reports."