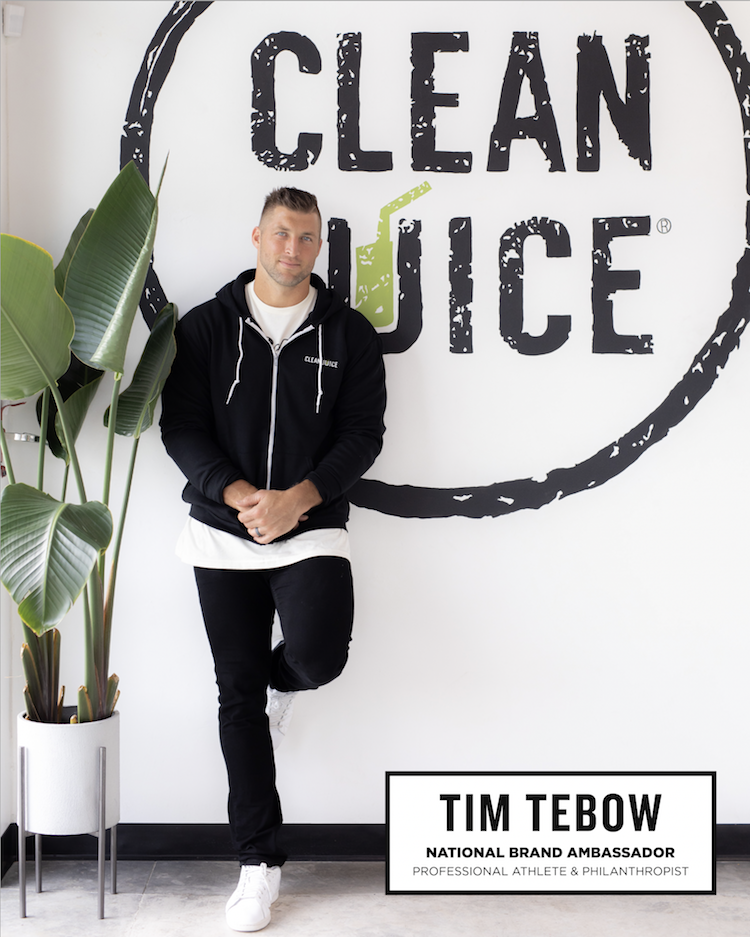 “I’m grateful when I’m not playing sports, I get to work on more important things,” said Tim Tebow, who has inked a partnership with Clean Juice.

Tim Tebow’s newly inked partnership with Clean Juice came about in a low-key manner. “I hate to make it sound so simple but it really was kind of that way,” said the philanthropist, public speaker, author and former member of the NFL’s Jacksonville Jaguars before getting cut in August. “It was a really good product and really good people.”

Kat and Landon Eckles are the founders of the Charlotte, North Carolina-based USDA-certified organic juice and smoothie franchise, which posted $41 million in sales from 104 units in 2020. This year it projects system sales to reach $60 million, with more than 70 stores in development, and will make its debut on the Franchise Times Fast & Serious list publishing in January. “When I first had the chance to get to know Kat and Landon, I felt a connection there, and similar hopes and goals,” Tebow said.

“We had several friends in common in the Charlotte area, the church they go to, their pastor and a lot of the people there. I’m friends with someone who works with us in anti-human trafficking areas. We had people say, ‘Hey, y’all need to meet.’”

Tebow and the Eckleses are both known for their Christian beliefs, which they profess regularly in public forums. In Tebow’s case, people seem to either love or hate everything he does, with ESPN’s Anthony McFarland calling him a “polarizing former athlete that we can’t stop talking about.”

Tebow takes the so-called Tim Tebow Effect in stride. “I’m so grateful that because of sports and other things, I was blessed with a platform that gives me a chance to do what I’m truly passionate about, and that’s fight for people who can’t fight for themselves,” he said, “whether that’s with our hospitals, rescuing people out of human trafficking…all of it is helping people in their darkest hours of need.”

When he was younger, “It was also really hard, because of the criticism and the naysayers, and I remember multiple times going to my dad. ‘Dad, if they would just come talk to me and get to know me, I really believe they would like me.’ We had a couple of very honest conversations about, ‘You know what, Timmy, unfortunately there’s probably going to be all those people that don’t want to get to know you.’ And that was I guess good advice but a little bit hard to take.”

Tebow’s deal with Clean Juice is to be brand ambassador, an equity investor and to open new corporate restaurants in partnership with the Eckleses, including beyond the Bible Belt where their religious beliefs may not be as popular. “I think really what they do is, they love people well. When you look at the scripture they choose, the quotes they have, it’s really to encourage people. The fruits of the spirit, and kindness and being healthy in body and strong in spirit,” Tebow said about the Eckleses. “It’s really to encourage and love people, and yes it comes from a faith-based background, but I’m grateful they’re not ashamed of that. They’re confident in that, and they’re secure in that. But I don’t think it’s something they try to push on anyone. It’s something they’re open to share.”

As for what happened with the Jaguars, in which Tebow’s former college coach Urban Meyer released Tebow in August after inviting him to try out for the team in June, he replied simply: “Had a great time, enjoyed it. It was a fun opportunity. I didn’t necessarily, going in, think it would” turn out that way, “but you go in and work as hard as you can.”

What’s next for Tebow? “In the world of sports, I’m not sure. We just got into our 65th country with a foundation, and when I hang up with you I’m going to have another meeting to see how we can build another hospital in another country,” he said.

“I’m grateful when I’m not playing sports, I get to work on more important things.”