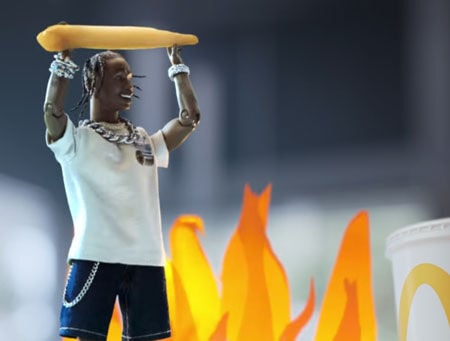 A promotional meal created by Travis Scott helped McDonald’s draw some outsized traffic, sales and market share with more collaborations on the way.

According to a look at the quarter that coincided with McDonald’s National Owner’s Association meeting, U.S. operations posted a 4.6 percent increase in same-store sales, almost in line with the third quarter of 2019 when that increase was 4.8 percent. To match that good performance during a pandemic is noteable. A major push that raised the company marketing budget by 23 percent and aggressive new product roadmap helped, as did faster drive-thru times.

But the partnership with Scott, the rapper and Instagram influencer with more than 33 million followers, was an especially bright spot that surprised even McDonald's.

“This promotion has performed really, really well; it’s interesting to look under the hood to see where this performance has gone,” said analytics firm Sense360 CEO Eli Portnoy in a webinar digging into the traffic, sales and consumer response to the promotion.

According to the firm’s head of analytics, Andrew Custage, the outperformance comes as restaurant industry traffic continues to languish. Broadly, he said, foot traffic to restaurants remains down by about 37 percent compared to last year. That’s happening across the country, in pandemic hotspots and places that are doing relatively well.

“Some of this may be impacted by self-policing by individuals—even if they can, they’re not going to restaurants,” said Custage.

As for McDonald’s performance, he said tracking a successful promotion like this shows a lot about the overall market.

“Certainly, when they have well-performing promotion, it has movements that are far reaching and impacts the sales of competitors by a much larger margin than a smaller brand,” said Custage. “Regular movement McDonald’s sees, those swings up and down in market share, are big enough in the context of the total market they can represent the entire busines of other brands. If McDonald's, for instance, gains 5 percent market share relatively, that’s the equivalent of total volume of inserting a brand like Five Guys into the restaurant market.”

The Travis Scott promotional quarter pounder with bacon, a Sprite and fries (with barbecue sauce for dipping) saw an 8 percent market share lift, just shy of the impact of the entire Jack in the Box system. In the timeframe of the promotion, Wendy’s traffic share was up 3 percent on its own successful breakfast push, but Burger King sank 1 percent, Chick-fil-A dipped 3 percent and Taco Bell sank 7 percent, according to the data gleaned from 2 million tracked phones.

According to credit card data, sales were up higher than traffic. Custage said sales gained about 10 percent sales lift in the promotional period, “pretty similar to what we saw in the traffic data,” said Custage.

It was so successful, that some locations started running out of fresh burger patties. McDonald’s responded by gating the promotion for app-orders only.

Digging into the “who” of the promotion, Custage said it was a lot of regular customers buying a little more and some key demographics.

“It looks to be this did well with an existing McDonald’s guest and got them to upsell more than it drove incremental visits that would not have occurred,” said Custage. “At a high level, some of the best performing segments that increase their performance best were ‘urban influencers’ and ‘healthy homemakers,” said Custage.

As seen in the chart above, those two cohorts were big fans. There may be some parental spending among the healthy homemakers, too, given Scott’s outsized reach among young fans and the explosion of social media around the promotion. Anyone on Instagram among eiher cohort during the promotional period saw either official marketing or some referential meme.

“In the case of ‘urban influencers,’ they skew younger and are especially motivated by things like social media and trends. And given the high volume of social media, this may have been a factor in why this did so well among this group,” said Custage.

There was also a big price factor. At $6, the promotion was one of the cheaper combo meals, especially at the premium end of the menu. In the data, there is a strong desire for value. Dollar chains are outperforming in retail that correlates with an increasing view that the pandemic’s effects will continue for more than six months—a sentiment Custage said 50 percent of respondents affirmed in recent surveying done by the firm.

Already, McDonald’s has rolled out a second partnership, this time with reggaeton artist J Balvin: a Big Mac, fries and a new Oreo McFlurry.