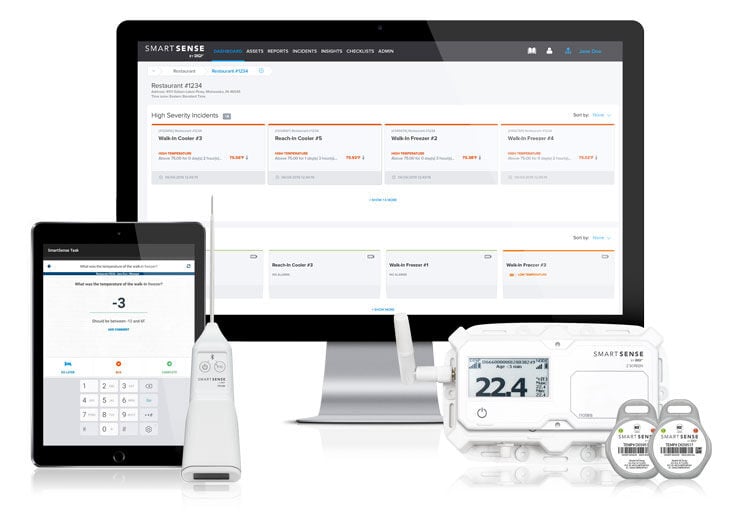 The various tablets, sensors and bridge behind Digi's SmartSense platform. 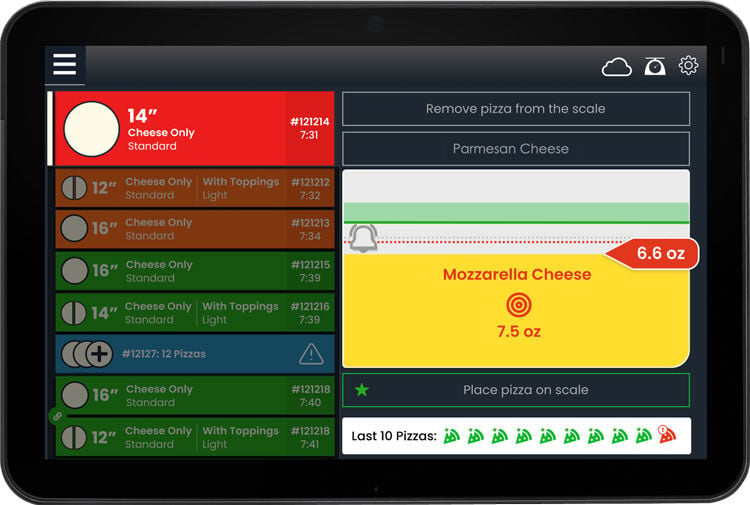 The internet of things, or IOT, continues to bring unique benefits to restaurant operations. The method of connecting cheap sensors and software to the cloud is still not widespread, but labor headaches are pushing the utilitarian tools into more corners of restaurants.

Jollibee, the Philippines-based parent company and franchisor of the homonymous Jollibee, Chowking and Red Ribbon restaurants, announced it hit the 100-location mark for an IOT-based temperature monitoring. The device, SmartSense, from the IOT developer Digi, has two methods. One is embedded sensors that provide continuous temperature monitoring, the other a Bluetooth monitor for spot checks and food-safety temperature logging.

According to Digi, the product alerts operators if temperatures are out of range, but can also detect potential equipment failures. For Jollibee, it's mostly about food safety.

“Food quality and sanitation is incredibly important, not only to JFC, but also our restaurant and store patrons,” said Maribeth Dela Cruz, president of Jollibee Group North America, in a statement. “Part of our strategy is leveraging technology to make it easy for our team to monitor and comply with regulatory standards."

She said the company has plans for 500 locations in the U.S. and will utilize such technologies as it grows.

Perfect Company, a developer of smart kitchen devices, also just announced a new device called ProMeasure. The smart scale is designed to sit in the kitchen and ensure exact measurements and prompted workflow support. Essentially, back of house workers can set their menu item on the scale, walk through prompts on an accompanying tablet and add exactly the right amount of ingredients.

Perfect Company CEO Michael Wallace said it can work with any food and was launched at the International Pizza Expo and Conference because the industry sees major food cost issues. Over portioning cheese alone, according to the company, wastes more than $280 million in cheese each year.

“Ingredient waste is one of the most pervasive issues commercial kitchens face. Our ProMeasure software and connected scale offer a straight-forward, intuitive way for kitchen teams to portion any ingredient accurately and quickly, lowering the opportunity for food waste and ensuring recipe consistency,” said Wallace in a news release.

The smart scale is designed to stand up to the kitchen environment and can withstand just about anything aside from a trip through an oven.

Between the lines of both products lies solutions to labor issues. ProMeasure, for one, tackles the all-important prep line, a key spot especially in pizza that can have dramatic effects on food costs. A few ounces of cheese here and an extra helping of pepperoni there can really add up. That pizza assembly role is also the target of other automation, including Picnic's pizza assembly bot, which seeks to reduce errors and waste with automation for high-volume pizza operations. The IOT device, however, can plug into workflows without redesigning the kitchen.

SmartSense also calls out the potential to "maximize productivity" with the solution. Like so many new digital kitchen software and tools, that generally falls on managers, who are busier now than maybe ever. Automated sensors filling out those temperature logs is one less thing a manager has to deal with.

Neither solution, to be sure, replaces an employee by any stretch like true automation might, but as every operator looks for some help on the labor line, IOT can be an enticing place to look for some help.