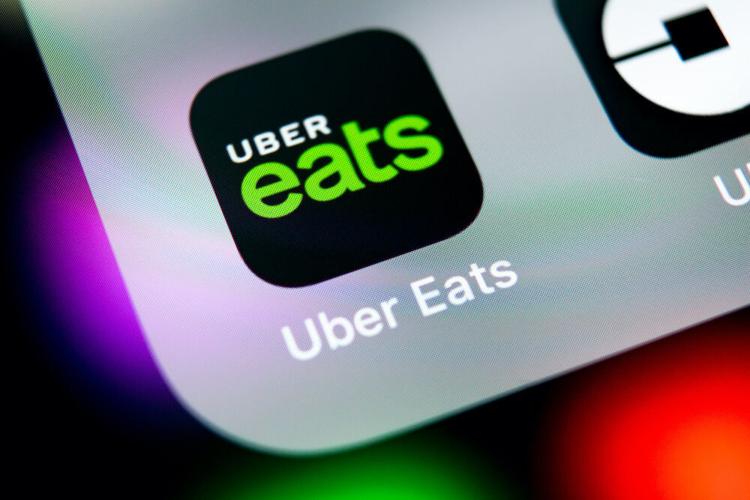 Uber Eats unveiled a popular ad campaign at this year's Super Bowl titled "Uber Don't Eats," which Director of Enterprise Partnerships Kelly Seeman noted is "a little out there" at the Food On Demand Conference. 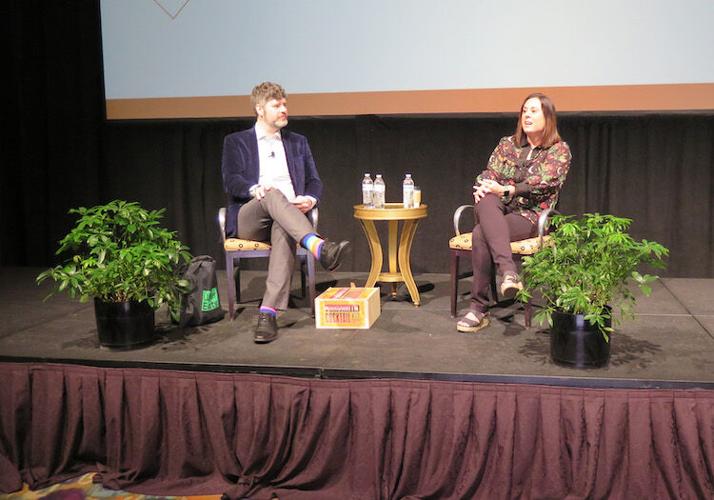 Kelly Seeman, right, discussed Uber Eats' dual strategy to deliver people and things on day two of the Food On Demand Conference. Editor Tom Kaiser asked the questions. At his feet is a margarita cocktail kit Seeman had delivered on stage to celebrate Cinco De Mayo.

An enthusiastic Uber Eats team was on hand first thing this morning to "whoo-hoo" their boss, Kelly Seeman, director of enterprise partnerships and keynote speaker at the Food On Demand Conference. Topic one was the "Uber Don't Eats" funny and popular ad campaign unveiled at this year's Super Bowl.

Nicholas Braun, who plays a wide-eyed but ultimately corrupted Cousin Greg on the hit show "Succession," unpacks a grocery bag delivered by Uber Eats, full of things you can eat and cannot eat. Bananas: eat. Paper towels: don't eat. Bottle of wine. "Eat, by drinking." Toothpaste: "It's an eats, but don't swallows. Get anything…but don't always eats it," Braun said.

Said Seeman about the ad campaign: "It's a little out there. 'Uber Don't Eats,' after we've been Uber Eats for so long. Where it gets us excited, not that restaurants are going away, but we're adding to the offerings, making it even more exciting and making it a super app for consumers to get whatever they want from their local area. That's been an exciting progression."

Tom Kaiser, editor of Food On Demand, asked Seeman how she would advise restaurant operators to take advantage of "this moment in time" in the delivery and off-premises space. "Obviously, it's not back to 2019 business conditions, but we're not in such a reactionary period as the early stages of the pandemic. What's an opportunity you see?" Kaiser asked.

"It's pretty exciting. The conversations we've had have really changed from, I need to get into delivery, to how can we optimize?" Seeman said.

She mentioned a statistic from Technomic's list of the top 500 restaurant chains. "I looked at the top 50 and I realized 44 out of the 50 actually have delivery partnerships. So for those six holdout brands, it's going to be interesting to see" what sort of delivery channel they choose.

"Where we've seen restaurants go is the direction of growing in their own way," Seeman said, adding the delivery providers' goal becomes, "so really helping in those dayparts, where maybe you need a little bit more. How do you lean into delivery, how do you lean into pickup?"

Seeman used a clever way to demonstrate how Uber Eats can help merchants hop on board promotional moments. "I have a fun surprise for you. It's Cinco De Mayo, we're doing a super fun activation," she said as an Uber Eats team member brought a margarita cocktail kit to the stage and presented it to Kaiser.

"You're getting your very own," Seeman said, adding she had another, larger box delivered for the entire Food On Demand staff. " You guys will have a party."

Said Kaiser: "That is a pretty great starting point," and there may have been some "whoo-hoos" from the Food On Demand crew in the back of the room.

Read more coverage here of the fifth annual Food On Demand Conference, which runs through tomorrow noon at The Mirage in Las Vegas.