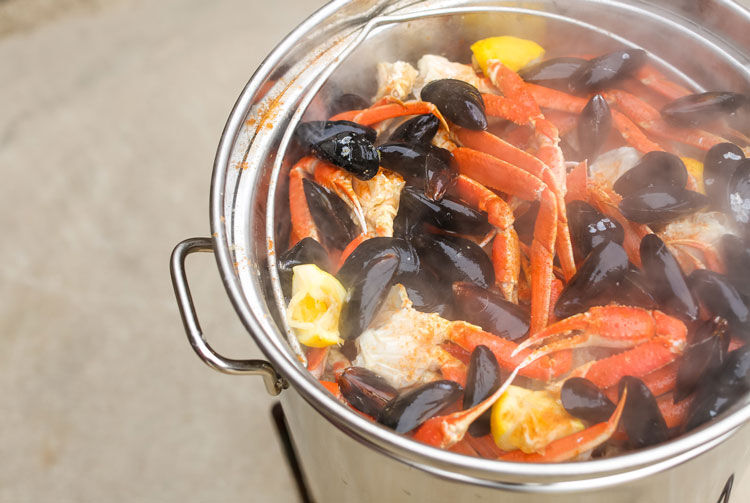 When everything shut down back in March and April, Outer Banks Boil Company founder Matt Khouri was as anxious as anyone. Restaurants in the small coastal vacation town were limited to 50 percent capacity and the beach-adjacent areas were blocked off to maintain social distance. Quickly, he said he started seeing the potential.

"Here in Outer Banks, nobody was allowed in these areas, nobody could get to these areas, so we were really locked down. We weren’t doing any business since it was the off season," said Khouri. "But we said, 'Hey it's not great now, but we're in such a primed position to handle this new era. We knew it was coming."

The company, which got him a solid "C" in an entrepreneurship class, was founded in 2016 on the idea of seafood boil catering and carryout. It's essentially a small-format prep kitchen where staff cuts potatoes, sausage, breaks down crab, lobster and cleans clams. Customers can either pick up a single-use pot or have an employee come to their home to cook, serve and clean up.

The only changes involved some bottles of sanitizer and switching to pre-wrapped utensils instead of the company's typical mason jar of silverware.

"It's more or less COVID-proof," said Khouri. "When the restaurant shutdowns happened and folks were pushed into 50 percent capacity, we were primed and ready. There wasn't a period of adaptation, it's what we had always done. The catering took a little bit to come back but it did and I think in these coastal towns people want a little bit of normalcy. And we were able to bring that to them in the home."

He said across all four locations, catering business was up by 110 percent year over year, and that was without eight weeks of operations. Carryout surged by about 150 percent. One of the biggest issues was securing enough of the carryout pots.

"We did over 1,600 caterings since May, so 20 a night here. It was absolutely insane. I think it was folks that just wanted to do something regular," said Khouri. "I don’t think anyone could have predicted the amount of business that came our way. It was a lot."

Like a lot of operators doing well during this time, he said it was bittersweet. He was thriving while other local institutions were suffering. Many of those furloughed or laid off employees, however, made ends meet by catering boils.

"My heart goes out to these folks, but a lot of the servers and bartenders in my area were left out of work or had their schedule shortened. The bars close at 11 and the rest were 50 percent capacity, so I went out and picked some of the better bartenders and servers. I can teach anyone to cook a seafood boil but I can't teach someone to be personable or communicate with folks," said Khouri. "They were huge assets to us this year."

He said most employees were doing two two-hour catering engagements a night. The surge in business continues, allowing him to keep the fairly seasonal vacation business open longer as folks from big cities in the region opt to work from their vacation home.

"We typically see a drop-off around Labor Day. This year, we were doing business that I didn’t think was possible in September, October and now in November because kids are homeschooling and folks are working remotely," said Khouri, though a slowdown would be welcome. "I definitely need a little time off in the winter, that’s my hope to focus on franchise growth. We cut our hours a little bit to give people a break, but we're still thriving."

One thing he'll be watching in Corolla, North Carolina, where the original location stands, is year-round population. Typically, it's a 500-person town through the winter but a surge of demand for real estate out of the big cities could push that to 1,500 or 2,000. He said how that persists post pandemic will have some big effects on the business there and at the other vacation-heavy locations.