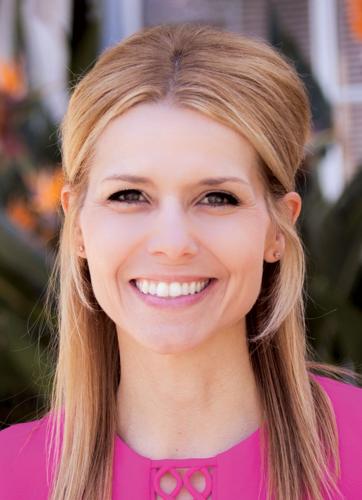 “I would say I’m freakishly good at planning ahead. And that’s one reason why my husband never wants to play Connect 4 with me.”

I’ve always admired Julia Roberts. She’s funny, quick-witted and equally as bad at karaoke as I am. She doesn’t take herself too seriously … she’s someone who’s beautiful inside and out.

I would love to find a way to travel the world and find those lesser-known hidden gems and find a way to not only enjoy it for myself, but also find a way to monetize it. There’s so much that people don’t see and also to help people know what’s worth seeing and get immersed in the culture.

Being in L.A., I would say the traffic. Even though it feels mean to say it. As an Angeleno it’s cost of living and traffic, but then you get blue skies and sun.

Trying to find the silver lining in the lockdown I looked for anything outside and exploring outdoors. I hiked Angels Landing in Zion National Park, scaled the Half Dome in Yosemite and climbed Mount Whitney. A lot of people don’t know, it’s the highest peak in the Lower 48. It’s the theme of my life, find things that scare me and throw myself into them.

Who or what did you have posters of on your bedroom wall as a teenager?

For me, I was a huge sports fan, particularly basketball, and I grew up in the heyday of Chicago. So many posters of the Bulls and Michael Jordan. I had that one, I think it was called ‘Wings,’ where he’s got his arms spread out. I loved watching the games and it was a bonding experience with my father.

What fictional character do you think would be most interesting to meet in real life?

One series I watch, and it never gets old, ‘The Office.’ So Michael Scott because he’s so well-meaning, caring and trying to do the right thing but always kind of flubs. And I think we all know someone like that.

I’m very big into LaCroix, specifically the Limoncello flavor, so that would be one. And I would also say coffee. I start every day with a Dunkin’ medium roast and a biscotti. And I think everyone enjoys me more after that first cup.

I would say I’m freakishly good at planning ahead. And that’s one reason why my husband never wants to play Connect 4 with me because I’m always thinking three or four moves ahead. Then, I grew up in a household without video games, so I’m not the one you want to get Mario to the castle or whatever.

For me it’s running. I’m a runner … I recently ran the New York City Marathon. I’ve also done a 50-mile race. Running provides a great source of strength for me, both mentally and physically.

I really like the show ‘Succession’ … but I would say the opposite of that family, which would probably be something more like ‘Modern Family.’ There’s chaos and some conflict but everyone comes together at the end … and I think it reminds us that not every family looks the same as far as its composition.

Editor in chief Laura Michaels asks the tough questions—What superhero power would you most like to have? What’s the weirdest thing you’ve ever eaten?—to show a side of franchising execs you don’t normally see. To suggest an industry professional, email lmichaels@franchisetimes.com.