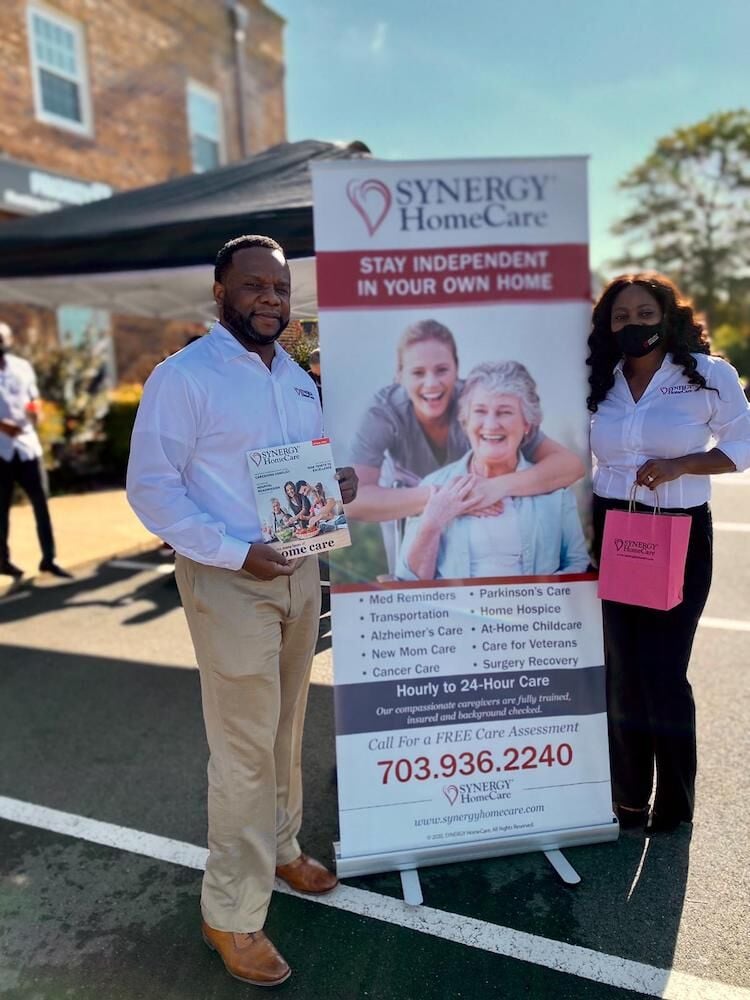 Felix Gbee and his wife, Sabita, at the ribbon-cutting for their Synergy HomeCare agency in Leesburg, Virginia.

After fleeing civil war in Liberia with his parents and eight siblings in 1997, Felix Gbee felt he owed a duty to his new country when he joined the U.S. Army after the 9/11 attacks. He carried the feeling forward, and has just opened a Synergy HomeCare franchise in Leesburg, Virginia.

"For me that was the only right thing to do," he said about enlisting after 9/11. "Basically the nation itself was in distress. I thought about my time, my family's time when we were in distress and the nation came to our aid. It was for me the natural thing to do, to join the military and for lack of a better term come to the nation's aid."

On January 31, 2002, he enlisted in the U.S. Army as an infantryman and was later deployed to Iraq for Operation Iraq Freedom in 2004 through 2005. He earned an Army Commendation Medal for valorous actions in combat, among other honors, and left the military in February 2020 because of medical reasons.

His interest in serving seniors revived, especially as COVID-19 began ravaging residents in nursing homes. "Back home, it's a thing of pride to take care of one's parents or grandparents. The concept of a group home or a nursing home is not something I grew up with," he said. "I wanted to find a way to continue serving my community." A home healthcare franchise "was an honorable way to do so."

His agency had a ribbon-cutting in mid-October. "It's going fairly well," he said. "We already have caregivers on board; we have almost a full staff. We already have customers that we're honored to serve."

He credits two sources for his mindset. "The combination of my father's lessons and Army values, I think reinforce the willingness to serve." His father would say: "Learn as much education as you can, so you can have the best quality to serve your country," Gbee said. "I think joining the military quantified that. Amongst the Army's values was selfless service, where you're putting the needs of others before your own."

Charlie Young, CEO of Synergy since April 2020, said private equity firm NexPhase Capital has invested heavily in the brand since buying out the founder in late 2018, including bringing in executives, developing a national referral program, and adding to digital local marketing spending.

"From a franchisor's perspective, this next five years is going to be filled with opportunity and for some potentially some risk," Young told Franchise Times. "There are currently 62 to 65 companies franchising in the home care space. You're going to see a lot of movement and a lot of change."

Synergy ranked fourth among senior healthcare franchises for systemwide sales change, up 10.1 percent to $175 million in 2019 from the year before, according to the Franchise Times Top 200+ ranking.