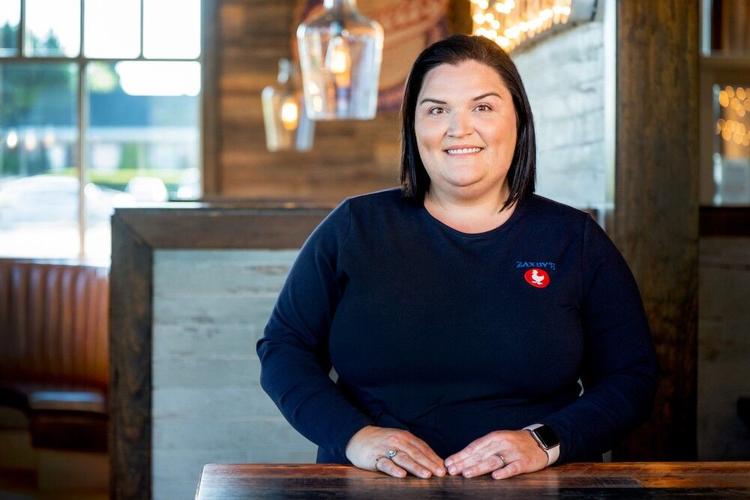 Michelle Morgan began her journey at Zaxby's 23 years ago as a front-line store employee and was recently promoted to the chicken concept's first chief people officer.

Newly created positions pose challenges for the first to pioneer the role, yet also offer the benefits of the blank page, a canvas on which the shiny-eyed executive paints their dreams upon, in theory.

For Michelle Morgan, it means getting to create daring programs and carry out her vision without being compared to someone else. Morgan started out as a part-time cashier 23 years ago at a Zaxby’s in Statesboro, Georgia, and was recently promoted to the company’s first chief people officer. Her firsthand experience working as a front-line employee and growing up in the system informs how she drives the people-first culture at the chicken brand with more than 900 locations.

“Historically, I’ve just been the person to see a need and fill it, and be the person to say hey, we need to do this, and rally people around that,” Morgan said. An example of that is when she brought teams working on Zaxby’s corporate restaurants together alongside other key players in the business in 2020. At the time, the teams were in separate silos with no connective tissue or shared vision clearly defined, Morgan said.

“My goal was to rally all of the people impact groups at Zaxby’s, pulling in the training people, getting them to work closer with HR, creating an organizational effectiveness team, pulling in corporate communication, all the things that really tie to the people experience of Zaxby’s,” she said.

Morgan’s ambitious plan was approved by then-CEO and founder Zach McLeroy, who exited the business as CEO last year and became chairman following the company’s $2 billion acquisition by Goldman Sachs. It was her colleagues who advocated for Morgan to be promoted to C-level status when Bernard Acoca entered as new CEO.

Related: Out as CEO, Zaxby’s Founder Reflects on 30 Years of Growth

Zaxby’s ranked No. 52 on the Franchise Times Top 400 Franchises with an estimated $2 billion in sales last year, a systemwide increase of about 4.3 percent.

One of Morgan’s proudest moments so far was implementing a program at the end of last year called “Caring For the Coop,” in which corporate staff could sign up to volunteer for shifts in stores and help with tasks that didn’t require extensive training. “Things your mamma taught you,” Morgan said—sweeping floors, taking out the trash, washing dishes, communicating with guests and running food out to tables or cars.

The result? One hundred Zaxby’s team members from the corporate support center volunteered at 50 stores, totaling 700 hours of “support and appreciation,” she said. The program had a dual impact: helping store employees in the midst of a staffing crisis, and helping corporate staff receive invaluable learnings on what it takes to work on the store’s front line.

A support center member gave feedback that the experience helped trigger "a lot of empathy for those who are on their feet all day running orders, cleaning and washing dishes." A store employee responded that "without the help of the team, we would have not been able to keep up with online orders, keep the dining room clean, get prep done or give the staff breaks. Them being here really helped the morale of the store."

In many restaurant systems, there is the perception a separation between the seemingly aloof, out-of-touch corporate team members who don’t understand the plight of the hourly workers. This program burst that bubble and helped create a sense of solidarity, pushing the brand’s servant leadership philosophy forward, Morgan added.

“It helped solidify the culture of an all-hands-on-deck approach. We’re going to work shoulder-to-shoulder with our fields teams and make sure we can help in any way.”

Like most concepts in the restaurant industry, Morgan will be focused on sustaining talent and reducing turnover at Zaxby’s as part of her role. How? Training and more training, she said. Zaxby’s recently built four new training facilities, and Morgan created three new training roles at corporate and launched a new training process.

“If we invest more in our people and more on training on the front end, we’re going to see that come through with our turnover numbers and leadership will be better in the stores,” she said.

“Leadership has the most impact on culture. I think a lot of people think pay is everything to people, and pay is very important to people … but what’s going to keep people is really great leadership in stores.”

A drawback to pioneering a new role is getting people on board with your ideas and getting widespread adoption, Morgan noted, especially when trying to integrate new processes and change people’s habits. “We did a lot of work this year that our teams are going through around the review cycle, and we are having workshops around giving coaching and feedback,” she added.

In 2020, Zaxby’s launched a diversity, equity and inclusion council and began integrating unconscious bias training into the company’s curriculum for leadership, both at the corporate and store level. Franchisees have the option to add it to their curriculum to train team members, as well.

The next step for Morgan is introducing Workplace by Meta to franchisees at the Zaxby’s conference in September, and showing how it helped improve camaraderie and engagement between corporate support team members and store employees.

“With the growth we’ve had and the growth we know is yet to come, we’re always going to do that with a focus on people. That is our first core value,” she said. “That is something that can never be replaced in a company, and definitely one that we hang our hat around.”

Stay tuned for more articles about pioneering a new role with executives from Unleashed Brands, Penn Stations East Coast Subs and more as part of a Franchise Times digital focus on “Lessons in Leadership.”