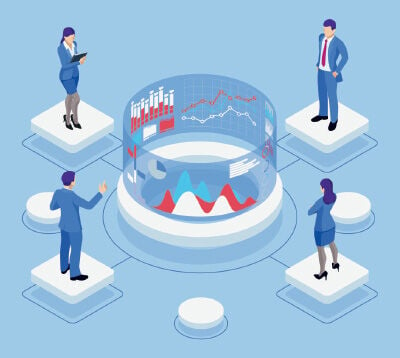 Operating remotely doesn't have to be isolated thanks to new technologies.

Even before the COVID-19 pandemic, nearly 40 percent of CFOs responding to a January 2020 survey by financial advisory firm BDO said they were putting investment dollars to work to bring on more digital tools. Such tools, from inventory management, communication apps, digital checklists and deeper point-of-sale integration all bring greater efficiencies on a good day, but now they can provide an important look at unit-level operations.

WorkJam is one of many providers helping operators communicate with ground-level staff. Beyond the important functions to keep employees and managers connected and in the loop, CEO Steven Kramer said remote management tools give businesses an edge, particularly with task management and digital checklists.

Sending a shift checklist directly to an employee’s phone or to an in-restaurant screen accomplishes the same goals as a paper checklist, directing employees through their shift. But the feedback to the manager, the owner or the parent company connects that loop. Instead of an area director stopping by to see that the new display boards are set up right, they can ask store-level employees for a picture of the completed setup.

Similarly, restaurant technology company HotSchedules, Now Powered by Fourth suite of offerings sends key analytics on sales and inventory up to the cloud. Where previously such tools were used in the restaurant by a general manager to get reports out, now those analytics help illustrate operations in the absence of in-person visits. It’s difficult, however, to completely replace that on-site experience.

"If you think about the DNA of a restaurateur, they are a very social person. They want to get into the restaurants," said Mary Hamill, the vice president of solution engineering at Fourth. "You have prominent CEOs," at least before COVID, "driving out to the restaurant, going out to say thank you."

Now, restaurant walkthroughs using FaceTime are becoming the norm, and other remote operational suites even include tools to provide employee recognition. Those CEOs cooped up at home can, instead of driving out to a location, send a note to the unit-level chat stream or, within WorkJam, use dedicated recognition and award tools. Many point-of-sale systems and integrated payroll solutions have options for small monetary rewards to help maintain those little cultural touchpoints.

Hamill said across Fourth’s offerings there’s been a huge surge in utilization. Prior to COVID-19 its full suite of tools was actually only used by about 20 percent of those with access. But as the pandemic hit, utilization surged to 70 percent as throngs of stakeholders began putting to work the digital tools they already had. Now, said Hamill, users need to focus on gleaning the information that’s actually vital to their business.

"Operators need to determine what is most important to their business and set up alerting capabilities so that information is sent straight to their inbox. Our analytics dashboard is set up to allow operators to see a holistic view of what is going on at their restaurants, providing them with a daily summary they can digest. However, if operators set up specific alerts for anomalies, they can quickly and easily dig into what matters most," said Hamill.

One step further is the growing field known as the internet of things, or IOT. It goes beyond digitizing duties, replacing employee input altogether.

Powerhouse Dynamics, an IOT provider with a core competency of energy management, provides operators with an up-close look at energy usage with its low-power sensors. VP of Business Development Jay Fiske gave an Arby’s test as a case study. The QSR giant saved $40 million in energy costs, but it was the remote management functionality that created less-tangible efficiency.

"Previously, they had a paper checklist," explained Fiske of how an Arby’s worker would document the correct temperature of meat. "They would temp the product out of the cooler, they’d cook, temp it, write it down, cut it, temp it and write it down. It’s very labor intensive and error prone. That now is 100 percent automated, they’re cooking by probe we integrated with the oven manufacturer. When they get one of those cook-and-hold ovens, it connects with the cloud system on site."

Every day the system generates a PDF with a list of everything that was cooked, the temperatures and the time pulled from the probe sensor and the connected oven. The method brought to light a training issue with a restaurant seeing undercooked roast beef.

"Franchisees were saying you can’t serve that because it’s unsafe. They called and said, ‘I don’t think your system is working,’" said Fiske. "But you could see that the beef was still frozen, that it was a simple training issue. That was immediately detected by the system and it was an easy fix."

The issue: kitchen staff wasn’t letting the beef thaw long enough in the cooler after it came out of a freezer. That example illustrates the potential for remote operations. It’s not something even a field visit would have easily spotted.

"In the absence of that data, it could have gone on for a long time with waste, or worse, expose a customer to unnecessary risk," said Fiske.