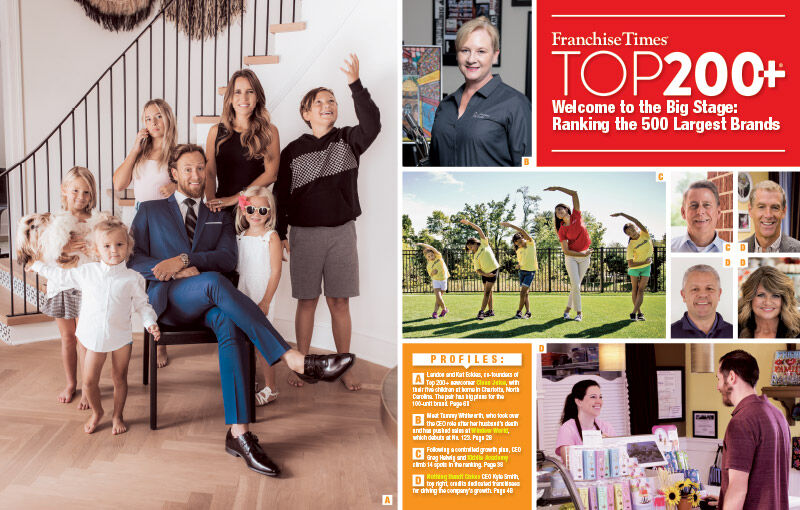 Set your benchmarks, this year’s Franchise Times Top 200+ may be the last look at the old world before 2020 results change everything. Based on 2019 systemwide sales, franchising’s strongest brands gained strength, emerging hot brands kept bringing the heat and brands on the decline continued to slow. Aside from a few surprises, the momentum of franchising continued on the same upward trajectory seen in the last few years.

The top 10 brands grew even faster, expanding sales by 5.2 percent to add $16.2 billion, just over half of the overall sales growth for the first 200 on the list.

McDonald’s hit the $100 billion mark and retained the No. 1 spot. 7-Eleven got close to $90 billion with some big acquisitions that added more than 2,500 locations to the company.

KFC and Burger King, meanwhile, grew fast internationally, retaining the No. 3 and 4 spots. And Ace Hardware kept the No. 5 position, with some modest sales and location growth pushing the brand to $17 billion overall. Subway, Domino’s and Pizza Hut rounded out the top eight.

Unit growth was an especially interesting component for this year’s top-ranking 200 brands. For the second year in a row, the majority of major-brand growth was international, but in 2019 that trend went into high gear.

It was also a year of rationalization, as many brands shut down underperforming locations. A historically difficult labor environment and exceptionally intense competition helped push that trend forward.

Subway closed the most locations, more than 1,500, and H&R Block closed more than 500. Long John Silver’s was highest among restaurants for closures as it shut down 133 locations in 2019.

Ultimately, many brands did better with less. In all, 13 brands in the top 200 were net negative on location growth but net positive on sales.

In the mix was Sonic Drive-In. It shut down 80 locations but still grew sales by $240 million. Chili’s, the lone sales grower in traditional casual dining, shuttered 22 locations but added $66 million in sales.

The most extreme mismatch was Roto Rooter. The company shut down nine locations (a 1.8 percent decline) and grew sales by $121 million (a 9.6 percent growth rate). On average, the group that closed locations and increased sales saw a location decline of 2.2 percent but grew sales by 5.2 percent.

Growth mixes with some rough results

Almost every industry segment saw at least some sales growth in 2019, as Franchise Times writers explore later in this package. That growth was pushed by some red-hot brands, but also dragged down by some brutal performances. Averages, after all, are made from extremes.

The hottest? Home2 Suites by Hilton (No. 98) grew by 38.8 percent. Orangetheory Fitness continued its explosive sales growth, adding 28.6 percent to its top line as the boutique fitness brand continued to expand. It also jumped up seven spots to land at No. 87 on the list.

Snapshot of a pre-COVID world

Writing this from home, as the COVID-19 crisis continues, shines a strange light on the Top 200+ project. How will the restaurant segment look for next year’s analysis after a 4.6 percent sales bump in 2019 but this year faced with unforeseen challenges?

How does the automotive segment that jumped 8 percent in sales last year look as all our vehicles sit in the garage collecting dust? And where does the hotel industry go after ticking up 3.6 percent last year but now with businesses closed and leisure travel cratered?

The 2020 Franchise Times Top 200+ serves as an important mile marker. Next year will tell a much different story.