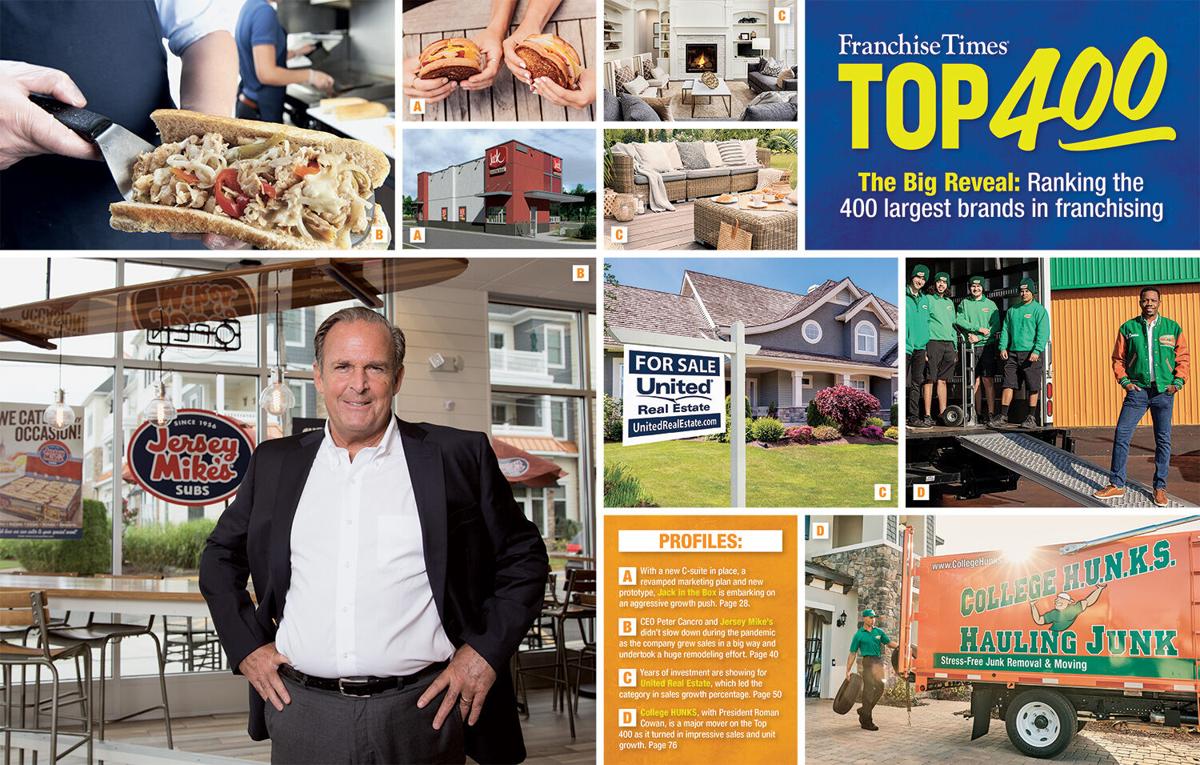 There’s no easy way to sum up how 2020 affected the franchise space. There were incredible stories of entrepreneurial innovation and brilliant moves, while other brands were paralyzed by regulations, radical change or fear.

As shown in the Franchise Times Top 400—our annual ranking of the largest U.S.-based franchise systems by systemwide sales—some brands thrived and some nosedived. But at either end of the spectrum, few would like a repeat of the dismal year.

Through it all, the top 10 saw only a few shake-ups. McDonald’s retained the No. 1 position by just over $1 billion, even as its systemwide sales declined by 6.8 percent to $93.3 billion one year after cresting the $100 billion mark.

7-Eleven is nipping at its heels. The convenience store giant grew by 3.1 percent to $92 billion as the corner mart became a pandemic go-to. KFC held on at No. 3 as its sales sank by 5.8 percent, a $1.6 billion loss in another year of battles for chicken market share. Ace Hardware moved from No. 5 to No. 4, growing sales by $3.5 billion or 21.1 percent as everyone tackled their home—and home office—projects. That marked the best dollar amount sales growth across the franchise space last year.

Ace Hardware moved from No. 5 to No. 4, growing sales by $3.5 billion. That marked the best dollar amount sales growth across the franchise space last year.

With its estimated $7 billion drop, Hilton suffered the biggest sales decline; that 67.2 percent downturn was also the largest dip by percentage of sales. The largest growth by percentage was United Real Estate. It saw sales explode by 126 percent and grew units by 42.1 percent.

The largest 200 franchised brands saw locations dwindle by 920 units or 0.3 percent overall. In the U.S., only corporate entities grew. Company-owned locations grew by 2.6 percent, or 954 locations, while franchisee-held locations dropped by 1,874, or 0.7 percent.

The Top 400 sales results mostly followed the logic of what would happen if the whole world was asked to sit at home for two weeks, a few months and then the remainder of the year.

Travel cratered, so hotels saw an incredible decline. Sales for the category sank 47.9 percent last year, a decline from $98 billion in 2019 to $50.9 billion. It was the hardest-hit category of franchising, but not by much.

Trampoline parks did not fare well with shutdowns and, later, social distancing. The small segment that had grown explosively in prior years saw sales fall by 46.1 percent while it also shed 75 locations, a 23 percent reduction. Few people were learning to swim, either. The swim school segment plunged by 36.5 percent. Then there was fitness. That segment of the personal care and services category declined by 23.8 percent.

The restaurant world bifurcated dramatically under social distancing, state and local regulations, and the general lack of in-person interaction. Then there was the lunch daypart, practically wiped out as office workers traded burgers and sandwiches for their stocked pantries or grab-and-go options (see the performance of c-stores). While there were bright spots in almost every category, the overarching trends showed some major shifts in consumer spending.

The bakery, café and deli segment was down 12.6 percent; sales at sandwich franchises were down 11.7 percent; and snacks were down 10.8 percent. Mexican was just shy of flat, sinking 1.9 percent as people shifted their spicy meals to the dinner hour. Chicken restaurant franchises benefited from the ongoing popularity of fried chicken sandwiches and increased sales by 1.8 percent to $51.3 billion overall.

Everyone ate a ton of pizza. In total, the segment was up 4.8 percent for delivery players, but dine-in pizza concepts saw sales spiral down 15.2 percent.

Breakfast and brunch franchises, meanwhile, where in a tough spot as they worked to quickly implement curbside and delivery service. Sales in the segment were down 34.2 percent overall.

For all the volatility of the year, 2021 is presenting its own hazards, from supply chain whiplash to intense hiring hardships. By this time next year, the sales performance across industry categories could look dramatically different—again.

Several well-known companies are not on the Top 400 list this year as some big-name brands opted not to share their numbers. Whether they hope to just forget 2020 ever happened or they simply couldn’t prepare the data in time to submit is unknown, but nonetheless, some of the big names are listed here.

How we rank the Top 400 franchises

The Franchise Times Top 400 is an annual ranking of the 400 largest franchise systems in the United States by global systemwide sales, based on the previous year’s performance.

In a five-month research process and building upon a database that began in 1999, our research team uses a combination of companies’ voluntary reports and publicly available data, including the franchises’ most recent franchise disclosure documents and Securities and Exchange Commission filings.

Systemwide sales is defined as the total sales for both franchise and company units. Those sales figures should represent sales to customers, and not corporate sales to franchisees or prospective franchisees, such as royalty revenue or franchise fees. Other revenue not directly related to franchising should not be included.

Franchise Times’ estimated revenue for hotels is based on a formula multiplying the chain’s revenue per available room (RevPAR) by the number of rooms and the number of days in the year. RevPAR comes from the company, or from industry estimates.

Research begins for next year’s project in late April. To submit your brand’s numbers or for more information, contact Franchise Times General Manager Matt Haskin, who leads the research effort for Top 400, at mhaskin@franchisetimes.com.