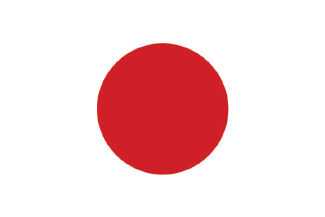 The red disk in the middle of the flag represents the sun without rays. The sun plays an important role in Japanese mythology and religion as it is said the emperor is a direct descendant of the sun goddess, Amaterasu. The flag itself is called Hinomaru, which means “circle of the sun.”

Location: An island nation in the Pacific Ocean, Japan is about the size of California.

Language: Japanese. Most Japanese students study English starting at age 12, but many of them learn to read and write it, while English speaking skills aren’t as strong.

Economy: Japan, with the third largest economy in the world (after the United States and China), is a key global player and member of the international trade system. It’s the fourth-largest importer of U.S. products, with a large and sophisticated consumer economy strengthened by per capita income of $40,247. Effective January 1, 2020, the U.S.-Japan Trade Agreement eliminates or reduces tariffs on approximately $7.2 billion in U.S. agricultural exports. The government still faces the challenge of balancing its efforts to stimulate growth and institute economic reforms with the need to address its sizable public debt, which stands at 235 percent of GDP.

News note: Japan’s largest airport, the Narita International Airport outside Tokyo, opened a novel coronavirus testing facility aimed at serving travelers as the country in September began a phased relaxation of its pandemic travel restrictions. The testing lab can deliver results within six hours but, according to Reuters, come at a cost—46,500 yen or $444—and aren’t covered by insurance. The postponed Tokyo Olympics, meanwhile, are still a go for 2021, though organizers haven’t decided how many, if any, fans will be allowed.

Franchising in the Japan: U.S. restaurant and retail concepts make up more than half of franchises in Japan, while the country’s aging population presents opportunities for healthcare and in-home senior care companies. The U.S. Commercial Service, however, does report U.S. franchisors have encountered challenges finding franchisees in recent years as the country deals with some economic stagnation and more local competition. Of particular note, according to a recent U.S. Commercial Service market report: “Japanese investors and franchisees have become increasingly demanding on ROIs with close attention to how a new venture will align with their core business competencies for strong growth potentials in the market.”