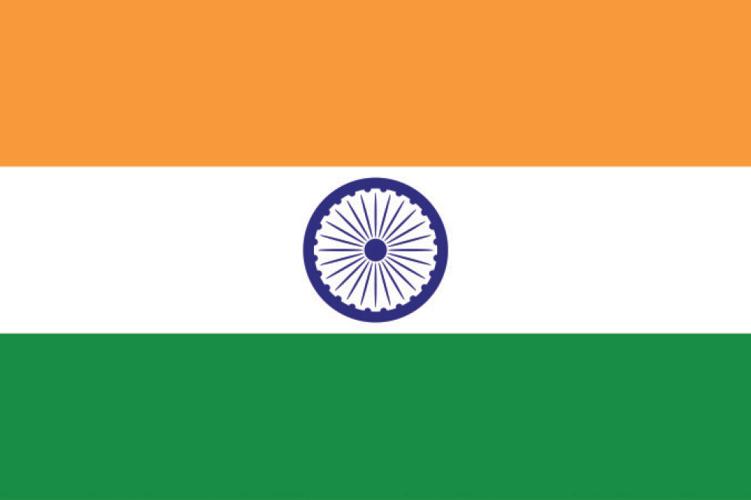 Saffron (subdued orange), which represents courage, sacrifice and the spirit of renunciation, is the color of the top horizontal band. White signifies purity and truth; green stands for faith and fertility. The blue chakra (24-spoked wheel) symbolizes the wheel of life in movement and death in stagnation.

Location: In Southern Asia, India is between Burma and Pakistan, and borders the Arabian Sea.

Language: There are 22 officially recognized languages in India, with Hindi the most widely spoken. English is considered the most important language for national, political and commercial communication.

Government: Republic of India, a multiparty federal republic where the head of the government is the prime minister and the president is chief of state.

Economy: Following economic liberalization measures that began in the early 1990s, India is developing into an open-market economy with a positive outlook for long-term growth due to its young population, healthy savings and investment rates, and increasing integration into the global economy. Challenges remain, however, given India’s discrimination against women and girls, inefficient power generation and distribution, ineffective enforcement of intellectual property rights, and other factors. India became the United States’ ninth largest trading partner in 2021, with sales of U.S. goods and services valued at $56.8 billion. Its government, however, is also promoting a concept of “self-reliance” aimed at developing and supporting Indian businesses and employment, which can make it difficult for U.S. companies to sell their goods and services in India.

News note: U.S. Treasury Secretary Janet Yellen visited New Delhi in November as part of the Biden administration’s effort to secure ties with India amid continued concern about reliance on Chinese products and high energy and food prices related to Russia’s war in Ukraine. “The United States is pursuing an approach called ‘friend-shoring’ to diversify away from countries that present geopolitical and security risks to our supply chain,” Yellen said in a public address. “To do so, we are proactively deepening economic integration with trusted trading partners like India.”

Franchising in India: A growing middle class looking for quality goods and services presents an opportunity for U.S. franchisors, which are typically well-regarded in the market. The current market size of the Indian franchise industry is approximately $50.4 billion, according to a KPMG and Franchise Association of India report.